Question: What do you get when you mix Middle Eastern food with a strategic and creative advertising, branding and interactive agency?

For the uninitiated, a falafel is a deep-fried ball or patty made from ground chickpeas, fava beans or both—a traditional Middle Eastern food usually served in a pita, which acts as a pocket, or wrapped in a flatbread known as lafa. Chicken, lamb and steak are among the complements. At least according to Wikipedia.

In this instance, a neighborhood eatery called the Hubbly Bubbly—launched last September and named after a colloquial name for hookah or waterpipe—works to wrap the dish in fun and color. And, while it’s nothing new for such marketing agencies to attempt the uncommon, there’s a twist: The agency is part owner.

The food, although tasty, isn’t so much the story.

Mark Unger, a partner in the Orlando firm Push, is also co-owner and chief executive officer of the restaurant, which is located in Orlando’s College Park. With his father-in-law George Joubran being a native of Israel, Unger’s involvement makes some sense. Yet, Push has taken the idea a bit further, sort of putting its money where its  mouth is. About 40 percent of the agency’s business is restaurant accounts. So collectively, the agency execs have used the opportunity to better understand how clients operate from the inside out.

“Just like you have a test kitchen, we wanted a test restaurant,” says Unger, Push’s director of interactive. “We want to be experts in the space, and this gets us as close to the customer as we’ll ever get.”

“You can’t go to a restaurant chain with a hundred-and-something units and be like, ‘Hey, I’m pretty sure this is going to work.’”

“It’s about understanding what it takes to be inside the restaurant and not just talking about it,” adds John Ludwig, Push’s CEO and founding partner. “This really gave us the opportunity to do a deeper dive.”

Essentially, while many agencies study the business of online ordering, loyalty programs and online marketing, this agency can obtain real-time data and perform real-time tests on its own. “If a client asks, well, have you tried this? We can say, well, yes, we have,” Unger says.

“Me being the owner, I have the ability to look at it every second of the day, and it gives me the ability to try things. … And I can connect the two dots tighter [between client and agency].”

In terms of branding, Push surveyed the marketplace and identified a niche. Unger describes Middle Eastern food’s mounting popularity as “kind of like Mexican food of 1990s and 2000s.”

At the same time, atmosphere and price point were major marketing considerations. “I knew this was the right type of food and that Orlando needed this; the market was ready for this. But it needed to be done in a way that wasn’t camels and pyramids on the wall and high end. We needed to do a very approachable version. … It’s a new way to experience this type of food,” says Unger.

Accordingly, the bright colors replace more traditional browns. The main logo is a wobbly bubble with a hand-drawn name. The food is fast and inexpensive. And there’s Georgie, a caricature of co-owner Joubran.

Strategically whimsical, for sure. Ultimately a marketing winner? Time will tell. 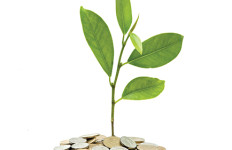 Grow Your Business with Social Entrepreneurship→