Take a cauldron of violence, obscenity, name-calling, lies, suspicion of Russian cyber-crimes, intra-party political fights (red and blue), social media wars, lawsuits, media bashing, Julian Assange as criminal or hero, accusations of everything imaginable and then some, illicit political party activities – stir them all together and you have the perfect brew for Halloween – the 2016 U.S. presidential election. 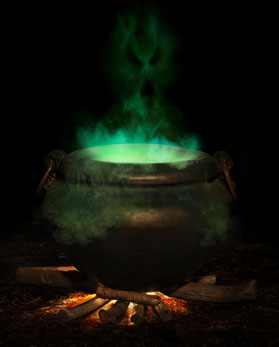 Just like Jason in the Friday the 13th movies, get ready folks, it’s coming ­– just as it has for the past 230 years. Nov. 8 is Election Day.

Congress instituted a uniform date for choosing presidential elections in 1845: the first Tuesday after the first Monday in November. The November date was chosen because, America being an agrarian society at the time, the harvest would have been completed.

At that time there was still one state – South Carolina – that didn’t give its citizens a direct say in choosing the president. There, the state legislature chose the electors who cast the state’s votes for president. A common practice in a majority of states through the first several presidential elections, by 1832 every other state had phased out the process of having the legislature choose electors. South Carolina held out until it seceded from the Union in December 1860, but went to popular vote of electors after the Civil War.

Interestingly, Florida in 1868 had to revert for one time only to the legislature choosing electors, having been readmitted to the Union too late to conduct a popular vote for president.

All of which leads us to another scary fact about our elections – all U.S. citizens now have the right to vote directly for presidential candidates and their electors, yet we seem to yawn at this amazing privilege. In 2012, less than 60 percent of the eligible population voted in the general election, based on just under 241 million people.

According to the Pew Research Center, the highest turnout rates were in Belgium (87.2%), Turkey (84.3%) and Sweden (82.6%). The U.S. lags most of its peers, ranking 31st among the 35 countries in the Organization for Economic Cooperation and Development.

(To Florida’s credit, the Sunshine State did better than the national average in 2012, with 64 percent of the state’s eligible voters turning out. That was the 16th best turnout among the states.)

In my first political science textbook I vividly recall reading the sentence, “the masses are ill informed and apathetic.” With all the brouhaha going on, how can one not join in the admittedly macabre, presidential election process?  You would not even be able to wear T-shirts proclaiming, “Don’t blame me, I didn’t vote for BLANK.” Plus we have all the political ads to suffer through as both candidates recognize the importance of the state’s 29 electoral votes.

And this year is a phenomenon, hopefully never to be repeated again. Can you imagine hundreds of years from now, students of history reading about THIS?

There are moments in the election cycle where you can close your eyes, listen only to the voices and not be sure whether you are listening to Donald Trump and Hillary Clinton on the campaign trail or Alec Baldwin and Kate McKinnon on Saturday Night Live.

And Florida can never forget the election of 2000, when hanging chads were the talk of the world and the Sunshine State was the butt of many jokes and lamentations by the 49 states who smugly could figure out how to vote properly.

Looking back across the last decade and a half, the rancor that surrounded that recount seems almost civilized and quaint, a Shakespearean mid-fall night’s dream than a nightmare. For all of the anger, Democratic nominee Al Gore was not claiming Florida’s presidential balloting was “rigged;” he was just saying it was botched. Pundits made jokes about “Flori-duh,” but no one seriously suggested the Cook County, Illinois, political machine had moved south.

In the intervening 16 years, we’ve gone from debates where Gore prattled on about a nonsensical lock-box to ones with phrases like “he choked” and “such a nasty woman.” We even had a debate where one candidate threatened to throw the other in prison after the election.

The country hasn’t seen anything like this since at least 1884. Back then, Republican James Blaine was accused of having unethical dealings with railroad executives and Democrat Grover Cleveland (the eventual winner) was dogged by rumors that he had fathered a child out of wedlock years earlier. This led to dueling rhymes, with Democrats chanting, “Blaine, Blaine, James G. Blaine – the continental liar from the state of Maine,” and Republicans taunting Cleveland with, “Ma, Ma, where’s my Pa? Gone to the White House, ha, ha, ha!”

Not pleasant, but still better than listening to chants of “Lock her up,” claims of election rigging, a tape of Trump describing a woman’s anatomy in the crudest possible terms or suffering through Clinton’s countless, albeit inventive, ways to avoid a substantive discussion about her deleted emails.

*So this year, Floridians, be thankful we’re not looking at a replay of the 2000 nightmare with Trump and Clinton sharing the role of Freddy Krueger. Get out and vote. We know it’s ugly and we pray there will be no lingering creepy clowns at polling places, but it’s our right as Americans.

It’s at least one thing we can all agree on.

*Editor’s Note: At press time a new poll had Trump leading Clinton in Florida by two points, but with the margin of error it is statistically tied.