The discussion of race in the U.S. has been front and center of late. Chris Rock hosted the 88th Academy Awards ceremony on Sunday night, where he tackled the issue of diversity in Hollywood and the #OscarsSoWhite controversy. Monday was the official end of Black History Month, an event that, too, has brought out differing opinions.

Close your eyes and imagine you were born a black girl in South Carolina in 1875 to former slaves. Mary McLeod Bethune was that child; we wrote about her humble beginnings in Part 1. Now we will explore her achievements and success in becoming a change agent and one of the most influential, respected black voices of her time. Her legacy lives on in Daytona Beach – Bethune-Cookman University.

Bethune came to Florida in 1904 with her husband and son, and the all-girls school she established flourished under her leadership. In 1931, the school became Bethune-Cookman College. Separated from her husband Albertus, who later died in 1918, she forged a path all her own.

Her leadership style was that of working within the system to change it. She negotiated and worked with white leaders at the time, to further advance her vision of racial equality. Strong support from James M. Gamble of Procter & Gamble and Thomas H. White of the White Sewing Machine Company helped expand her school.

As college president, she traveled throughout the U.S. In 1924, she was elected president of the National Association of Colored Women (NACW). Bethune envisioned acquiring a headquarters and she achieved this with a property on Vermont Avenue in Washington. She led it to be the first black-controlled organization with headquarters in the capital. Today it is a National Historic Site.

With her national reputation, in 1928 Bethune was invited to attend the Child Welfare Conference called by Republican President Calvin Coolidge. In 1930, President Herbert Hoover appointed her to the White House Conference on Child Health.

In 1935 she founded the National Council of Negro Women in New York City. She was appointed Director of the Division of Negro Affairs of the National Youth Administration by President Franklin D. Roosevelt, a position she held from 1936 to 1943.

Bethune also was a member of Roosevelt’s unofficial “black cabinet” where she counseled the administration on minority affairs and interracial relations. She first met Eleanor Roosevelt in the 1920s and they were lifelong friends.

After leaving Bethune-Cookman College as president in 1942, she took up residence at the NACW headquarters in Washington in 1943 and lived there for several years.

With her outspoken nature and active lifestyle given the period in which she lived, controversy swirled around her. One example occurred in Winter Park at Rollins College. Hamilton Holt, who became president of the school in 1925, was a founding member of the National Association for the Advancement of Colored People (NAACP). In 1947 Holt planned to honor Bethune but was prevented from doing so by the board of trustees.

In 1949, knowing the board was against the idea, he honored her with the doctorate during the mid-winter convocation for the school. During that time such an honor was unheard of in the South. The Chicago Defender called it, “a milestone in human relations.” It was the first time an African American had received an honorary degree from a white southern college.

Later that year she was invited to visit Haiti by President Dumarsais Estime, at which time she was given the Medal of Honour and Merit. In the early 1950s, President Harry S. Truman appointed Bethune as a United States Representative to the second inauguration of President William V.S. Tubman of Liberia, West Africa. While there, she received the Commander of the Order of the Star of Africa, one of Liberia’s highest honors.

Bethune died in 1955 of heart failure in her home in Daytona Beach, now a National Historic Landmark. Before her death she penned her “Last Will and Testament.”

The Mary McLeod Bethune Memorial was dedicated in Lincoln Park in Washington on July 10, 1974, the anniversary of her 99th birthday. Robert Berks was the artist who erected the monument, he also is behind the bronze bust of President John F. Kennedy that is found in the Grand Foyer of the Kennedy Center for Performing Arts in Washington.

Funds for the monument were raised by the National Council of Negro Women. It had the distinction of being the first monument honoring an African American or a woman to be installed in a public park in the District of Columbia. The inscription on the pedestal reads, “let her works praise her,” while the side is engraved with the above passage from her “Last Will and Testament.”

There were 250,000 people who attended the unveiling ceremony, including Shirley Chisholm, the first African-American woman elected to Congress.

Dr. Bethune was a trailblazer and the recipient of so many “firsts.”

An educator, activist and civil rights pioneer, she is an important part of Florida’s unique history.

Orlando Tragedy: What Do I Tell My Children?→ 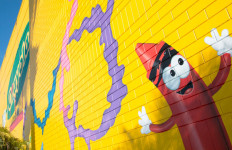