Late-night comedians have spent the better part of the past decade and a half ribbing the Sunshine State’s electoral mishaps and for good reason.  Even our well-heeled counties have found ways to offer comedic fodder with voters misunderstanding the mechanics of voting and creating embarrassing delays in Election Day vote tabulation.  But comedy aside, based on the numbers and the state’s recent refusal to be labeled electorally either red or blue, Florida is the most important state in the upcoming presidential election.

Of the top seven most populous states, all but two have consistently given their electoral votes to the same party, election after election, since 2000. And of these behemoths of population and electoral votes, Florida and Ohio are the only states to accurately select the past four winners.  California and Texas?  Locks respectively in the Democrat and Republican columns.  New York, Illinois and Pennsylvania?  Though Pennsylvania claims diversity in its voting ranks, all three states have gone Democrat since 2000.

Florida and Ohio remain electoral powerhouses of no certain allegiance but one is more so than the other.  “As Ohio goes, so goes the nation” remains a bellwether of presidential outcomes, however, the Buckeye State’s 18 electoral votes haven’t the same clout.  The nation will turn its eyes to Florida whose windfall of 29 electoral votes likely will determine the winner.  Voters will stay up late, Nov. 8, to find out (1) if Florida voters are still troubled with punching chads or simply punching someone and (2) if the election is close, and the winner needing 270 total electoral votes, how will Florida decide.

To underscore Florida’s importance, consider this: Beginning in 2000, 40 states plus D.C. have voted for the same party in each of the presidential elections (in that span, Florida has voted twice for each party). Add up the electoral votes that went to the Democratic candidate, and you have 242, just 28 shy of the 270 needed to win. Florida has 29 electoral votes. It’s easy to do the math. If former Secretary of State Hillary Clinton holds serve on the Democratic states and wins Florida, the presidency is hers.

So there is an electoral lock.  Does that alone make Florida such an important wildcard? No, Florida has another vital ingredient – actual political diversity.  According to the June 2016 report from the Florida Division of Elections, the state has 4,396,609 registered Republicans and 4,659,801 registered Democrats.  Another 3,222,170 voters are registered as minor party or no party affiliation.  And if 70 percent to 75 percent of the state’s registered voters, as expected, complete a November ballot, these minor party or no party voters – or roughly 2 million Floridians – will determine the next president.

“There is an old adage in Florida politics that ‘the further north you go, the further south you get.’  This is very true with regard to voting and track records, as well,” says Tico Perez, Orlando attorney and political commentator.  “South Florida is always strongly Democrat as the condo and retirement voters continue to consistently vote Democrat, and it is usually a sure bet that the I-10 corridor is a strong Republican base of support.”

So imagine you’re a Florida registered voter having no major party affiliation and thus considered an independent.  We’re talking a robocall from each candidate or their respective political action committees every day from Labor Day until Election Day.  Do the math.  We’re talking two months or more than 60 days.  You haven’t had such attention since you brought your Labrador puppy to third-grade show and tell.  As a Floridian and an independent you’re that important and especially if you live along the I-4 corridor.

“The real wildcard, the place where most of the spending will occur, and the place where we will be awash with candidate and surrogate visits will be Central Florida and the I-4 corridor,” says Perez.  “To say that the voters from Daytona Beach to Tampa Bay will pick the president is not an understatement.” 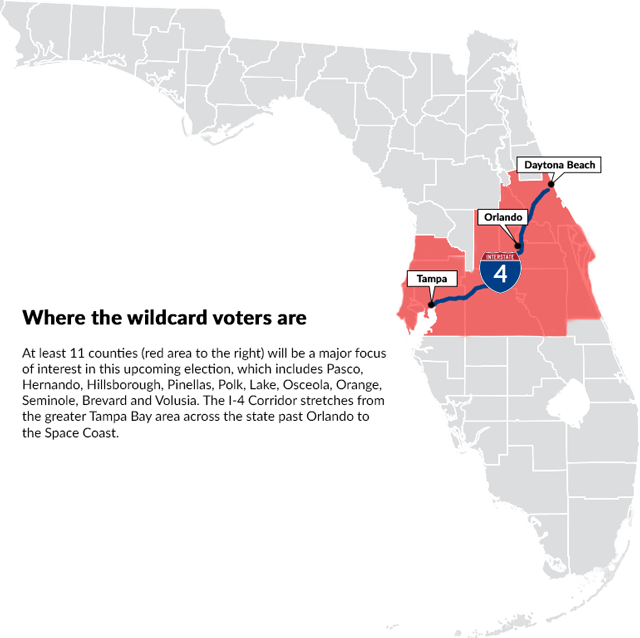 Going into the conventions, the election between Clinton and Trump had the makings of a “we won’t know it’s over until it’s over.”  Since then, Trump has stumbled and Clinton has opened up a national lead of about 7 points, according to Real Clear Politics, a website that averages the major national polls. That methodology shows Clinton with a lead in every battleground state, plus a few (like Georgia) in which no Democrat has been competitive for 20 years. But, in Florida and some of the other states (including Ohio and North Carolina), her lead is within the statistical margin of error.  Absent a complete Trump meltdown, most observers believe the race will tighten after Labor Day.

That will keep Florida in the spotlight up until November, and the state could have some surprises up its sleeve. Gary Johnson, the Libertarian candidate, might create a shift based on his current 8 percent approval rating but the real debate remains between two major candidates with die-hard supporters and detractors. Also consider the supporters of two former candidates, Ted Cruz (R) and Bernie Sanders (D), who combined for 973,730 votes in the Florida Presidential Preference Primary, March 15.  Many of their supporters have yet to confirm a willingness to support either party’s ticket.

Add these voters to the pool of 3,222,170 independent voters and you can see why one out of every five political dollars spent in the fall will be spent on the Florida vote.  And with more than $1.1 billion already spent on the primaries and another $2 billion to $4 billion expected in the fall, Florida can expect an economic windfall well into the tens of millions of dollars.

According to NBC News, Clinton and her allies have already spent $20 million in Florida.

“As Florida goes, so goes the nation?” Follow the money trail.

“The turnout battle is hugely important, and the down ballot races will have to work hard to get the voters to the polls, but in the end, if South Florida performs as it usually does, and the I-10 corridor performs as it usually does, it all comes down to I-4,” says Perez.  “Expect spending, spending and more spending.  The media buys, the phone banks, the signs and the people knocking on our doors and interrupting our dinners will be relentless.  Get ready.”

In the Sunshine State, the election isn’t just about selecting the next “Leader of the Free World.”

It’s about business and the business of politics is looking good. 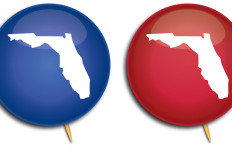