The Orlando study was commissioned by the Orlando International Airport and found 303 unique companies in almost 800 locations. Additionally, the study identifies 23 industries, collectively employing more than 60,000 people. Dr. Ilan Alon, professor of international business and director of the China and India centers, and Rollins student Aniruddh Fatehpuria conducted the study. 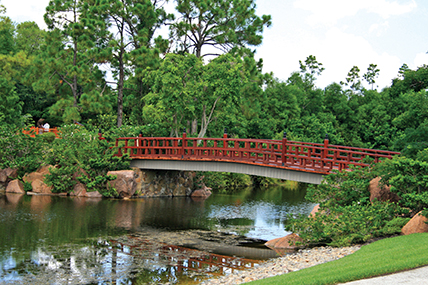 A unit of a United Arab Emirates company, Gulftainer announced its cargo terminal at Port Canaveral recently, ending the suspense behind the Project Pelican mystery company. The company plans to make a $100 million investment and will create a total of 2,000 direct and spinoff  jobs when fully operational, including 500 at the port. It signed a 20-year lease with a 15-year option.

Luck of the Irish for the University of Central Florida? UCF Knights head coach George O’Leary thinks so and will be leading from the sidelines when UCF kicks off its 2014 football season at the Croke Park Classic in Dublin facing off against the Nittany Lions of Penn State on Aug. 30. The game will air on ESPN2.

UCF placed 3rd in the nation in a computer programming competition, “Battle of the Brains” held in late June in Ekaterinburg, Russia. UCF was among 122 teams competing and advanced from a pool of 8,000 regional teams worldwide. The nation’s second-largest school placed 21st worldwide.

Enterprise Florida is organizing an export sales mission to Singapore and Malaysia, Sept. 19 -26. They will lead a delegation of Florida-based manufacturing and professional service provider companies to network and meet face-to-face with top businesses in that marketplace.

Flagler County welcomed economic development professionals from the Czech Republic in May. The trip was a result of Aveo Engineering, one of the largest aerospace firms in the Czech Republic that expanded its operations in Flagler. Aveo President Christian Nielsen recommended the county to Czechinvest, and they came to see Flagler for themselves. The county is hopeful other aviation-related manufacturing companies take flight to Flagler.

On the heels of the U.S. Tennis Association headquarters announcement in Lake Nona comes another match. Visit Orlando has become the exclusive global partner of the U.S. Open. The highest-attended annual sporting event in the world is broadcast in 185 countries. In addition to on-court exposure, Visit Orlando will be able to engage with 700,000 consumers attending the event.

A lot of eyes in South Florida were on the United States’ first trade mission to Cuba in 15 years, which took place in late May. U.S. Chamber of Commerce President Thomas Donohue spoke during a conference at the University of Havana as part of the week-long event. Cuba has experienced sluggish economic growth during the past decade and last year its economy grew by only 2.7 percent, far short of its 7 percent goal. In March, Cuba’s National Assembly approved a “modernization bill” to loosen the island’s foreign investment rules.

In anticipation of future economic opportunities in Cuba and Latin America, Manatee County is taking the bull by the horn, literally, with a trip to the Catalonia area of Spain. Scheduled for mid-September the group of business, economic development professionals and county and port officials are in search of direct investment in local manufacturing. Ivan Mutis, CEO of GM&L, a consulting company, is organizing the trade mission focusing on import and export opportunities for Manatee and Sarasota.

There has been a lot of activity in the international arena. May was proclaimed World Trade Month by Gov. Rick Scott and the Florida Chamber of Commerce in Tallahassee held its annual International Days conference in April. Florida is second only to California in the number of companies that export – 60,000.  The state would like that number to increase and is pursuing many initiatives to accomplish it.

Apples and oranges! At press time a new report from Tallahassee-based Florida TaxWatch finds that farming and processing of Florida produce contributes more than $7.5 billion to the state economy. Home to more than 475,000 commercial farms covering 9.25 million acres, the production of crops, in addition to agriculture, benefit other industries, including manufacturing with 8.4 percent of the state’s food and kindred products’ manufacturing output tied to produce.

The 11th Annual Florida-Japan Summit was held in late May at The Morikami Museum and Japanese Gardens in Delray Beach. The Florida Delegation, Southeast U.S./Japan Association was founded in 1975 to promote ties of trade, investment, tourism, education and friendship between Florida, Japan and six other southeast states. Japan is Florida’s eighth-leading trade partner. Co-sponsors of this year’s event: Enterprise Florida; Weiner, Lynne and Thompson; Team Volusia EDC; and the Greater Fort Lauderdale Alliance.

This article was printed as “All that Glitters… FDI in Florida.”

What Does “Grexit” Mean for Florida?→