As reported by FORWARD FLORIDA, the state’s ports are gearing up for a bigger share of the global trade pie. In a new report from Florida TaxWatch, it cites the emergence of more efficient trade and logistics hubs as a huge economic development driver for Florida given its location and easy access to the rest of the U.S., Central and South America, the Caribbean, Europe, Africa and Asia. Since trade cannot live by ports alone, the emergence of intermodal centers is critical for the efficient movement (transfers) of cargo.

The Central Florida Intermodal Logistics Center in Winter Haven hosted its ceremonial grand opening for its first 318-acre terminal on Oct. 16.  Operated by Jacksonville-based CSX, the terminal is surrounded by 930 acres and plans include up to 7.9 million square feet of warehouse distribution centers, light industrial and office facilities. This project is a huge spoke in the state’s global trade wheel prospects ultimately serving Orlando, Tampa and South Florida markets.

Port Tampa Bay’s board of commissioners approved a $24 million crane purchase project in late October. The two 65-ton gantry cranes were contracted to China’s Shanghai Zhenhua Heavy Industries Co., which will construct and deliver the cranes in first quarter 2016. The port’s container terminal currently covers 40 acres, but expects full build-out to 160 acres with throughput capacity of 1 million. The crane purchase was funded partially with $12 million in supplementary funds from the state.

In other trade mission updates:

Florida Secretary of Commerce Gray Swoope led an export sales mission to Panama, Oct. 5 to 7. Total merchandise trade between Florida and Panama totaled $2.3 billion in 2013 and is expected to grow. The Panama Canal expansion is expected to be complete in early 2016. Trade routes are being scrutinized globally. New Canal rates are expected to be announced in December for the shipping lanes.

Copa Airlines, flying direct from Tampa International Airport to Panama City, has added daily flights in November for the upcoming holiday season. The airline began nonstop service less than two years ago, and in that time traffic has doubled. 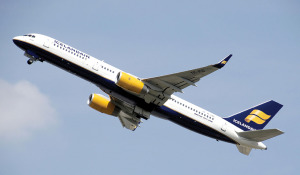 Icelandair announced it will resume service from Orlando International Airport starting September 2015. Non-stop flights to Iceland will operate four days a week to its main hub at the Keflavik International Airport near its capital of Reykjavik, with connections to more than 20 destinations in Europe. The airline was the first international carrier at OIA in 1984.

In other transportation news, All Aboard Florida, a subsidiary of Coral Gables-based Florida East Coast Industries, broke ground in late October on its Fort Lauderdale train station. Passenger service in South Florida is expected to be operational by end of 2016, with its second phase from West Palm Beach to Orlando expected to start in 2017. Construction is ongoing for its downtown Miami station, called MiamiCentral.

According to media reports, the company has recently applied for $1.75 billion in a private activity bond allocation from the U.S. Department of Transportation.

The $2.3 billion rail project is estimated to have a $6.4 billion economic impact.

Port Canaveral is funding a study to look at where a potential train station could be located in Brevard County. The Canaveral Port Authority is going to fund a study conducted with the Space Coast Transportation Planning Organization to determine the viability of a Brevard station and where it would be located.

Orlando-based IDEAS completed a strategic agreement with Global CEO Clubs China to begin marketing IDEAS China. IDEAS Founder and Chairman Bob Allen said, “Our joint agreement empowers GCC to market our IDEAS China brand to media and experienced design clients in the entertainment, enterprise and health-care verticals across the country and we’re excited about the potential.”

What Does “Grexit” Mean for Florida?→