Hollywood superstar Robert Downey Jr. has a new friend. It’s 7-year-old Alex Pring, a Central Florida resident, who is also making quite a name for himself.

Downey, aka Tony Stark in the Iron Man movie series, recently met with the youngster in Atlanta. They shared stories and then Downey presented a gift: an Iron Man-styled 3D-printed bionic arm. 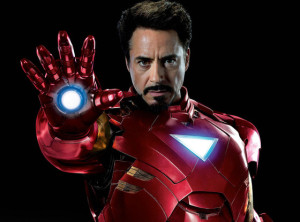 Pring was born with a partial arm. In July, he hugged his mother for the first time, thanks to a prosthetic arm students designed and manufactured in the maker labs in Orlando’s University of Central Florida (UCF) College of Engineering and Computer Science for less than $350.

The story gained national attention and caught the eye of Downey, who has more than 24 million followers on Facebook and 3.85 million on Twitter. His Facebook post, in part, read: “Had the absolute privilege of presenting a brand spanking new 3D-printed bionic Iron Man arm to Alex, the most dapper 7-year-old I’ve ever met.”

Downey also thanked Albert Manero, a UCF mechanical engineering doctoral student and Fulbright Scholar who leads Limbitless Solutions, the UCF-based team of engineering students and many others who volunteer to make 3D-printed bionic limbs for children at no cost to families. Downey’s Facebook post also includes a video of him presenting the bright red, Iron Man-styled 3D-printed bionic arm.

The video is one of several produced by Microsoft OneNote as part of a national campaign called “The Collective Project” that prominently features UCF engineering students on the Limbitless Solutions team. The campaign aims to showcase how technology brings people together to change the world.

Children’s prosthetic arms are especially difficult to make because of the need to miniaturize components. Additionally, most insurance companies won’t pay for them because they need to be replaced often as the child grows. That’s where Manero, who is scheduled to graduate from UCF with a Ph.D. in December 2016, stepped in with the help of fellow students to, in turn, help Pring. 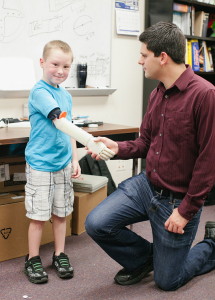 Since then, Limbitless Solutions has become almost a media phenomena, taking on a (viral) life of its own. The Limbitless Solutions Foundation was created, and Manero and friends have continued helping young people. In late November, 7-year-old Madelyn Rebsamen from Virginia received an early Christmas present — a new prosthetic hand, the first of its kind, specially designed to include part of a forearm. As they did for Pring, the students spent their spare time and their own money on the project.

“When you can get people to dream big things, then you have a real chance of changing the world,” Manero described at the time.

He is changing the world — and so is Alex Pring. He just might even be a superhero.

Forward Florida covered this wonderful story about Alex and our partner’s at UCF in our December issue. Click here to view that article.