The Tampa Hillsborough Expressway Authority (THEA) is on the road toward autonomy.

The user-financed public agency is self-sustaining and led by a board of local citizens. Tampa Hillsborough Expressway Authority develops and owns toll highways as well as non-tolled roads. In turn, all collected tolls are reinvested into projects in Hillsborough County.

THEA, though, is especially ahead of the curve on this front: As 2014 hit the midyear point, the agency was offering businesses its access-controlled toll road, arterial feeder roads and office facilities to test and develop technologies focused on autonomous vehicles — automated cars capable of sensing their environment and navigating without human input.

Earlier in the year, the U.S. Department of Transportation approved the Lee Roy Selmon Expressway in Tampa as a connected vehicle test bed, joining a small number of other test-bed locations nationwide. The Selmon Expressway, largely by virtue of its limited access and arterial road networks, provides researchers the capability to test within the latest technology standards and architecture of the USDOT vehicle and infrastructure research program. Areas of study include safety, mobility, environmental and efficiency advantages, along with services, standards and components. 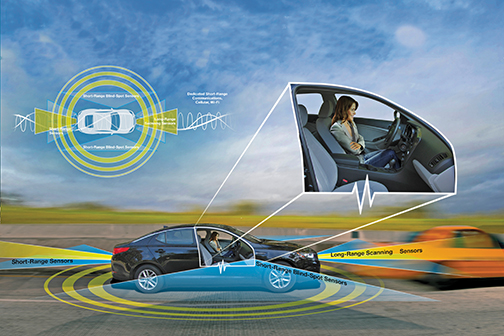 Call it taking autonomous vehicle technologies and looking “under the hood.” Also view it as continuing innovation that spans decades. Tampa Hillsborough Expressway Authority was the first expressway authority to convert to All Electronic Tolling (AET), along with being the first to employ reversible express lanes and the first to use image-based tolling in Florida. Yet, THEA believes this drive toward AVT could be a real transportation game-changer.

The technology behind autonomous vehicles can save lives, create jobs and lighten congestion during workday commutes, according to published reports. Down the road, the expected benefits are fewer navigational errors, traffic collisions and accidents; reduced traffic congestion and increased traffic flow; higher speed limits; and expanded freedom of use by those of any age or disability; among others.

In Tampa, officials assert, the technology has the potential to impact lives at a level equal to the “smartphone.”

“As Hillsborough County aligns itself to be the access point to Central and South America, the ability to develop and test autonomous vehicle technology in Tampa provides a great opportunity for companies to potentially be on the cutting edge of transportation changes impacting two continents,” comments Hillsborough County Commissioner Kevin Beckner.

Florida became the second state allowing automated vehicles to operate on its roads when State Rep. Jeff Brandes, R-St. Petersburg, chairman of the Senate Transportation Committee, championed legislation in the 2012 Legislative Session. A total of four states now have passed such legislation.

Tampa Hillsborough Expressway Authority wants to be the one. Here’s the pitch to companies exploring locales for research: “Tampa Bay’s attractive technology, business and lifestyle climate create a perfect environment for those interested in advancing autonomous vehicle technologies. Tampa Bay provides an affordable, competitive and efficient operating environment with the resources companies need to expand and thrive, including critical connectivity to Tampa International Airport, Port Tampa Bay and interstates 4, 75 and 275.”

THEA Board Chairman Stephen Diaco describes the effort as part of the agency’s “legacy of achievement.”

Brandes labels it a “bold step.”

Tampa Hillsborough Expressway Authority seeks to make it a smart one, too. It has partnered with the University of South Florida’s Center for Urban Transportation Research Automated Vehicle Institute to deliver specialized research support in a local university setting. The Institute is an internationally recognized resource for policymakers and transportation professionals. The 45-person multidisciplinary research faculty includes experts in economics, planning, engineering, public policy and geography. The result is the requisite mix of academic knowledge and real-world experience to develop innovative, implementable solutions for all modes of transportation, contends Diaco.

In addition, Tampa Hillsborough Expressway Authority is partnering with other transportation providers such as the Hillsborough Area Regional Transit Authority (HART). “It’s terrific that development and testing is being done in the City of Tampa,” says Mike Suarez, HART chairman and City of Tampa councilperson.

In the end, from both transportation and economic perspectives, the hope is that all roads lead to Tampa Bay, almost literally and autonomously.

This article was printed as “Driving Innovation.”