McKinley “Mac” Conway published his book, The Airport City, in 1977. Today’s Spruce Creek residential community south of Daytona Beach, built around an airfield, embodies the concept of an airport city — especially the live and play components.

Daytona Beach has always been a magnet for speed. From automobile racing on the hard-packed sand to pilots using the beach as a runway, it has attracted adventurous souls. Aviation history puts the first flight on the beach by a glider all the way back to 1906.

Given Florida’s climate and geography, the military used Florida for extensive training during World War II. The navy embarked on Florida’s east coast in a major way. Spruce Creek Airport was built in 1943 as a training facility.

Meanwhile, on the other side of the nation in California, Navy Ensign McKinley Conway was working as a project engineer for the Navy’s first jet fighter, the Ryan FR-1. Conway held degrees in aeronautical and electrical engineering.

After the war, “Mac” bought a used single-engine Cessna 170 and started to conduct business travel around the U.S. He recognized the convenience of air travel and the logistics problems it created with ground transportation. 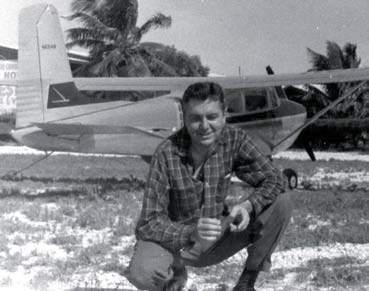 He also became aware of the large number of military installations and airfields that were decommissioned, including Spruce Creek, and returning to the purview of local governments. His idea was to convert these sites to industrial developments and office parks.

Conway flew around the southeastern U.S. and other parts of the country, “evangelizing” his theory. In 1970 he held his first national seminar on “Fly-in Development” in Cape Kennedy.  His thriving consulting business gave way to his first development, Spruce Creek.

Conway assembled fellow pilots and investors and purchased the airfield in Daytona in 1969, and the project was officially launched in July 1970.

Conceived as a place for other pilots to be able to fly in and enjoy recreational pursuits in a secluded place of natural beauty and fly out at their convenience, Spruce Creek set the stage for what has become a premier residential community built around a 4,000-foot lighted runway.  Residents can pilot aircraft, from a Stearman to a Gulfstream, directly from their homes.

Its undisputed mastermind: Conway, who recognized the importance of multimodal transportation many years ago.

Conway founded Conway Data and Site Selection magazine. He died in 2011 at age 90.