A homegrown Central Florida engineering firm has hit pay dirt, racking up $400 billion in projects during the last 50 years, many of them related to transportation.

Seymour Israel literally built his 50-year-old business from the ground up. No, make that from below the ground up. And Israel insists he’s remained fiscally and philosophically grounded in his work and his life ever since, even as Universal Engineering Sciences Inc. has blossomed into the largest family-owned company of its type in the U.S.

“I began my business in Merritt Island,” Israel remembers. “I had a drill rig, a couple of trucks, a little room at a sewer plant I liked to call my office and a whole lot of ambition.”

Much of Israel’s early work was testing Florida’s temperamental soil for stability so builders could have confidence in the structures they erected. But, he was also building a sound fiscal base for his young company. Israel’s creed then, and still is, “We will do whatever it takes to make it happen.”

Fast forward 50 years. Today, he is chairman and CEO of Universal. His son Mark Israel, P.E., who officially joined the company in 1988 but says he was “hanging around the company’s equipment since I was a kid,” is president. 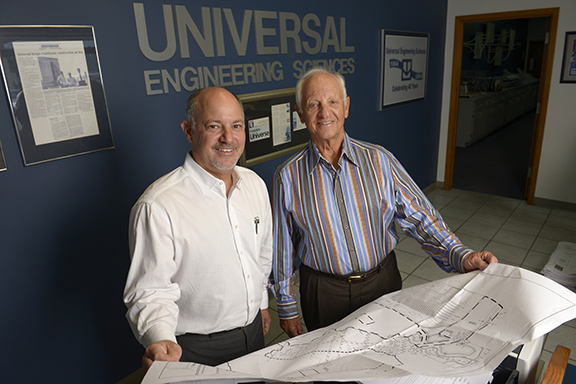 Universal provides both private and public clients a range of in-house and consulting services to meet the increasing demands of a state that is growing in size and sophistication. Number crunchers at the company’s sprawling headquarters in Orlando have determined that since Sy Israel set up shop in the Brevard County sewer plant, Universal has worked on more than $400 billion worth of projects in Florida, more than $150 billion in Central Florida alone. The company oversees 600 employees in 17 offices in Florida and Georgia with more than $44 million in annual sales.

In addition to geotechnical services, the firm is increasingly asked to provide advice and counsel on large jobs, including private inspections and plan reviews, once strictly the purview of inspectors for local and state governments.

“We are considered the owner’s rep in many cases,” Sy Israel says. “Our opinions are valued, and I’m proud of that trust.”

Counting the nearly $ 1 billion PortMiami tunnel project and other large transportation clients, the firm has been involved in game-changer construction throughout the state.

“The future for our business certainly includes transportation,” Mark Israel points out. “Florida is growing up and moving forward. We’re playing an important role in both. More than 30 percent of our business these days is transportation related.” This segment has become so vital, both to Florida’s economic future and the firm’s bottom line, that Universal hired John Barker Jr., formerly with the Florida Department of Transportation, as Universal’s district materials engineer from the firm’s Tampa office. 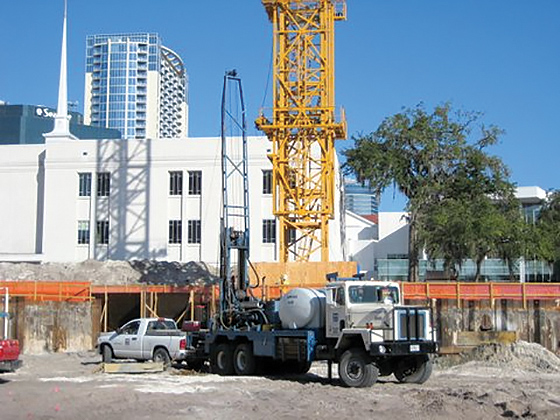 Universal’s recent transportation assignments include SunRail, Orlando’s new commuter train system; work at Orlando International Airport that will involve the planned intermodal transportation hub; and many miles of the area’s highways that crisscross the peninsula.

To trains, planes and automobiles, Universal can now add ships, both sea worthy and space worthy. The private space commercialization company, SpaceX is a client, as is the Kennedy Space Center.

The PortMiami Access Tunnel, considered the only classic tunnel built in the state, is one of the most ambitious engineering projects in Florida. It burrows beneath the main ship channel at the port. Universal is charged with providing geotechnical exploration and construction materials testing, making sure the underwater roadway meets all FDOT standards. Peter Read, P.E., from Universal’s Miami office, represents the company on the job.

The tunnel, already ceremoniously opened, is expected to officially open this summer.

“My dad says he started this company with below-ground services,” Mark Israel says. “Considering the tunnel project, we’re still down there.”

Other aboveground jobs with which Universal has been involved include medical (Orlando Health) and sports and entertainment (Amway Center, Dr. Phillips Performing Arts Center in Orlando and the Jacksonville Veterans Memorial Arena).

Sy and Mark Israel have adjoining offices at Universal Engineering, and while they enjoy separate lives beyond work, they maintain a natural and warm father/son relationship in the office that now and then includes some humorous verbal shots across the bow.

The company’s value system, posted for all to see, lists family atmosphere; integrity; whatever it takes; dynamic, quality and professionalism; and fiscal responsibility as the pillars of the company’s success. The Israels insist that it’s not by accident that family is No. 1.

Call it being very grounded, indeed.

This article was printed as “Universal Impact.”