Tourism is the state’s bread and butter. (There’s nothing quite like good ole Southern comfort food.) It is Florida’s largest industry, accounting for almost one-fourth of the state’s sales tax revenue, and remains a powerhouse for job creation. According to VISIT FLORIDA, the state’s official tourism marketing organization, an estimated 1.2 million direct travel-related jobs were created last year, up 4.7 percent from 2014.

During a February press conference at Disney’s Epcot, Gov. Rick Scott revealed a historic 105 million people traveled to Florida in 2015. This marks the fifth consecutive record year for tourism, exceeding not only the previous high of 98.5 million in 2014, but also Scott’s initial goal to reach 100 million visitors in a year. Though impressed by the figures, Scott envisions opportunities for growth and hopes to draw 115 million visitors to the state in 2016.

“Tourism plays an important role in supporting our economy, and we will continue to make strategic investments in the tourism industry to keep Florida on track to becoming first for jobs,” Scott said in a statement. “With five consecutive record years for tourism, it is time to set our goal even higher.”

Part of those strategic investment plans is to increase annual tourism, from both tourists and residents, especially during off-peak seasons. Heeding Scott’s call to action is a historic Florida city located among the rolling hills, giant oak trees and Southern-style hospitality in Florida’s panhandle.

Tallahassee, often overlooked in favor of the state’s other attractions, (think beaches and theme parks), is pulling no punches this spring.

Leon County is enjoying strong growth along with the state, experiencing six consecutive years of record-breaking visitation. The latest data from Visit Tallahassee reveals that tourism is nearing the billion-dollar mark in the state’s capital county. More than 2.4 million visitors from 47 different states and 36 countries came to Leon County in 2014, generating an economic impact of $963 million to local businesses that helps support more than 11,000 tourism-related jobs.

It is not surprising the region is maximizing its efforts to keep driving up those numbers. A billion-dollar record is on the horizon. To Lee Daniel, executive director of Visit Tallahassee, identifying the region’s strengths is key in order for Tallahassee to be considered a viable destination.

Daniel says the challenge is to build up the months where they don’t have a lot of visitors. Football season and the legislative session draw crowds. Looking to “other times of the year to level out those peaks and valleys make it a lot better for our local businesses and more sustainable for the community.”

“We offer something different they don’t have out on the coast and in the major theme park areas,” he said.

Tallahassee is showcasing a different side to its tradition of politics, football and canopy roads – a quirky side that redefines spring break adventures. With the capital’s rich history, heritage and nature-based opportunities, locals are polishing a hidden gem.

From universities to museums to retail, if you ask a local about his or her thoughts toward the city, their responses will invariably include passion for the community and a sense of belonging.

Within walking distance from FSU, Florida A&M University and Florida’s State Capitol buildings, there is a cultural haven called Railroad Square Art Park filled with World War II-era warehouses turned artist studios, galleries and shops. Proof Brewing Co. is tucked in the heart of the square, in a giant black warehouse which interestingly enough blends into the colorful landscape. Proof Brewing serves as Tallahassee’s first craft production brewer and largest brewery, as well as a trailblazer for other breweries hopping onto the expanding craft beer scene.

An accomplishment that doesn’t go unnoticed by the brewery. Proof Brewing Regional Sales Director Alan Truesdell emphasizes the homegrown culture. He boasts of the city’s active role in fostering a sense of ownership, pride and even success in Florida’s burgeoning $2 billion craft beer industry, partnering with several beer hotspots throughout the state, including Cigar City Brewing in Tampa and Kush in Miami.

“Everything is made right here. Everybody that does everything — we all live in Tallahassee. We have children in Tallahassee,” Truesdell said. “We love the fact that we were the first ones to do this, and it has taken off as well as it has.”

Another transformative cultural district pouring into the state’s economy is a former brownfield site near downtown enjoyed by hundreds of people every day. The newly constructed 24-acre Cascades Park is a $30 million “floodable” park designed to double not only as a picturesque urban space, but also an innovative stormwater runoff facility to reduce local flooding. It is listed on the National Register of Historic Places. The vast green space is ideal for visitors interested in enjoying the scenery or an outing with their dogs.

Other features include more than 2 miles of multiuse trails, a family oriented playscape, Cascade Fountain, the interactive Imagination Fountain and historic exhibits that span centuries, such as the Prime Meridian Marker, Smokey Hollow Commemoration and Centennial Field. A chic restaurant, The Edison (named for Thomas Edison), is an exciting addition to Cascades Park, offering an internationally inspired menu in a renovated 95-year-old building with quite the illuminating presence.

However, the state-of-the-art Capital City Amphitheater is really the centerpiece of the park, seating about 3,500 people, and sets the stage for big-name performers and economic opportunity when events like the Spring on Stage Concert Series (through May 28), Word of South Festival (April 7 to 9) and Southern Shakespeare Festival (April 15 to 17) bring thousands of visitors to town.

“We’re special and unique, and I think more and more visitors are coming to that conclusion as well,” Daniel said.

Unlike most of Florida, Tallahassee experiences all four seasons. Fortunately for visitors and residents, the city has plenty unique experiences to offer not only in spring, but year-round.

Here’s an overview of some of this season’s quirky happenings: 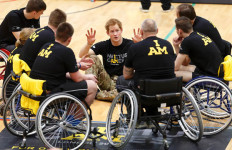