This conference, Dec. 9-10 at the Florida Hospital Nicholson Center represents a huge transformational movement in the global technology world. The concept is to take the Internet of Things (IoT) – literally the connection of a series of things (including sensors and software) that allows data exchange – and then apply the emerging technology to tackle four central global problems: world hunger, pollution/air and water, clean energy and health care, commonly referred as mobile health (mHealth).

The pace is so fast that as Stephen Whalley, chief strategy officer of MEMS Industry Group (MIG) posited, “The companies that are going to be heavily involved five years from now, they can’t even attend this conference because the companies don’t exist yet.” As he explained, because of the growth and changes in technology, exponential companies are just coming out of nowhere and dramatically changing the face of business.

The MEMS Industry Group (micro-electromechanical systems) is the trade association that oversees this massive movement. The first TSensors Summit took place in 2013 at the University of California Berkeley and was organized by Janusz Bryzek, Ph.D, who after three years of leading the summits, in March of this year became CEO of eXo System in the San Francisco Bay area.

The TSensors portion of the Summit stands for one trillion sensors and is borne of the “Abundance” concept. Written by Peter Diamondis and Steven Kotler in 2012, Abundance: The Future is Better Than You Think, predicts a future where technology and other forces will solve mankind’s biggest problems.

Manufacturing will certainly play a role in this and Florida is positioned to do its part.

The International Consortium for Advanced Manufacturing Research (ICAMR) is being built in Osceola County. There is collaboration and support for what is the world’s first industry-led partnership for commercial development of smart sensors and photonics.

UCF pledged $10 million in startup money for ICAMR and $7 million for faculty. Three other schools are contributing $250,000 annually – the University of South Florida in Tampa, the University of Florida in Gainesville and Florida International University in Miami. The Corridor (formerly the Florida High Tech Corridor Council) will contribute up to $6.5 million and expand its signature Matching Grants Research Program for more funding opportunities. The Metro Orlando Economic Development Commission also is a contributor.

It is projects like this that make Orlando the perfect location for the TSensors Summit, where thought leaders and technological visionaries will explore platforms and applications for sensors and manufacturing.

The organizers of the summit recognized Florida is an established global tourism destination, but more importantly, they also recognized the Sunshine State is on the leading edge of technological advances. Whalley was impressed, for example, with the Nicholson Center itself.

“When we visited, we saw what they were doing with robotics and automated surgery,” he said.

Additionally, given the importance of collaboration to this movement, there was the University of Central Florida in Orlando. The nation’s second largest university, operating under President John Hitt, is “America’s Leading Partnership University.”

Then there is Medical City at Lake Nona, home of unprecedented collaborative research that is predicted to generate an annual $7.6 billion economic impact. And, tech centers are emerging all across the state, including ICAMR in Kissimmee. The consortium, not surprisingly is one of the sponsors of the Summit. Other sponsors include Enterprise Florida, UCF, the Metro Orlando EDC and the Corridor.

“Florida has a long history of innovation going back to the birth of the IBM PC in South Florida. The state continues to attract leading companies from the IT sector thanks to our diverse and highly-skilled workforce and our commitment to making Florida the best state in the nation for business,” said Bill Johnson, Florida Secretary of Commerce and president and CEO of Enterprise Florida.

It is anticipated that the economic impact of sensors will increase the global economy by $18 to $32 trillion in the next 10 years. Just this week tech giants Hewlett Packard and Intel announced a partnership to forge open standards based on the IoT with an emphasis on “computing at the edge.” They will establish IoT labs at HP facilities in Houston; Grenoble, France and Singapore.

Whalley, a tech veteran who worked at Intel, served on the team there that brought the world the USB port in the early 1990s. It’s an excellent case study of problem-solving, in this instance for connectors. 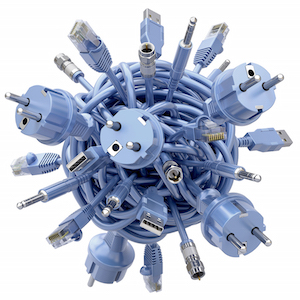 “It was just a rat’s nest,” Whalley recalls of the pre-USB days (remember serial ports?). “We said, ‘Okay, what’s the right way to do this? Could we get one connector that would basically be the only connector you would need for a printer, a scanner, a keyboard, a mouse, another peripheral that you might want to add in the future?’

“Anyway at the end we had about six companies (Microsoft front and center) that we brought together. We’ve got a 0.5 version of the spec here. We’d love your input. Start giving us feedback. Then we all started working together until we got the 1.0 version. We put the silicon out there and Microsoft had the operating system and USB was born,” explained Whalley.

The Tsensors Summit draws obvious parallels. There is a problem statement. How can it be solved? Who are the key players that you want to get going initially on the task?

In order to meet the demand of sensors in the marketplace, Whalley pointed to the emergence of printed electronics. “We believe there’s going to be a combination of traditional sensors and semiconductors built in a fabrication (fab) facility, essentially built on silicon. That’s going to continue, but we believe there will be a combination of those devices along with printed electronics. Being able to print your transistors and sensors onto plastic or flexible substrate as we call them. Ultimately being able to print them on paper.”

Given the international players attending the summit from industry, academia, government, research and various sectors, it should start a dialogue that resonates around the globe and leads to a roadmap of problem-solving that we can only dream of.

We might add that dreamers have a way of being remarkable agents of change. It was 85 years ago (Nov. 17) that Walt Disney drew an illustration of a mouse.

For more information or to register for the TSensors Summit, click here.