There was pomp and circumstance, sheer elation, sighs of relief and chills. Well, maybe those were from the unseasonably low-40s morning weather. Following 10 months of construction activity that would have outpaced even the best of no-huddle offenses, the Orlando Citrus Bowl celebrated its reopening ribbon cutting on Nov. 19.

The renovation, roughly a 90 percent makeover including a name change from Florida Citrus Bowl, came at a price of $207 million. The highlights: Only the upper bowl remains; there are now four levels and two concourses. A 20,000-square-foot, open-air plaza deck sits atop the lower-bowl seating that features 41,000 new plastic chair-backs with extra legroom. New contoured benches outfit the upper deck with a bit more room to spread out. Club seating for 6,000 fans comes with access to a lounge and private restrooms. And a main screen that measures 88 feet wide and almost four stories high has replaced the scoreboard that was unceremoniously dumped those 10 months ago. There are also smaller (but still big) LED video screens, complemented by 355 TVs throughout the stadium. 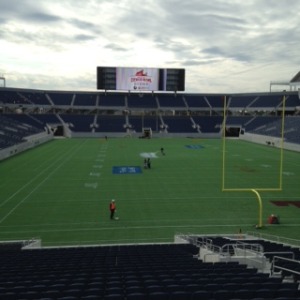 You get the picture. Modern. Classy. Necessary. In the big-bucks world of college football, this was badly needed by Orlando to remain relevant.

On Nov. 22, the new Orlando Citrus Bowl will officially be back in business, hosting the annual Florida Blue Florida Classic, which pits longtime rivals Florida A&M University and Bethune-Cookman University. Officials of Florida Citrus Sports, the organizing entity, say it will be the first of many classics in what they hope will eventually bring national championship glory to Orlando. 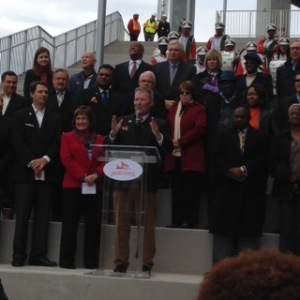 On the day of the ribbon cutting, Orlando Mayor Buddy offered a slightly different take but one that resonates with the business community. His message: “The reconstructed Orlando Citrus Bowl will enhance our quality of life by allowing us to host the best sporting, art and entertainment events in the world and will also bring economic impact to our community. In 2015, the stadium will be the only venue in the country to host three college football bowl games. Events like these bring visitors to Orlando, create jobs and are a big reason that Forbes recently ranked Orlando as the top city in the country for job growth.”

Yet, despite that big score, could the celebration have been trumped? Perhaps so.

Shortly after the renovated stadium’s big moment came the announcement of the annual Orlando Kickoff Classic — an inaugural event designed to put its stamp on the start of each college football season. The Florida State Seminoles will play the Ole Miss Rebels on Labor Day 2016. The neutral-site season-opening game that evening (Sept. 5) will be televised nationally by ESPN. 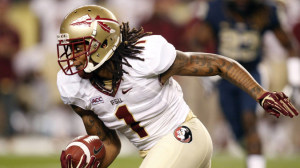 It will be the first non-bowl neutral-site game at the stadium since the 2000 Notre Dame/Navy game. Even more, the game establishes Orlando as a major kickoff destination for the future. The 2016 Orlando Kickoff Classic is the first in a multiyear agreement between Florida Citrus Sports and ESPN Events, a subsidiary of ESPN, to host a major neutral-site college football game in the Florida Citrus Bowl during the opening weekend of the college football season.

“Florida State and Ole Miss will undoubtedly be a game worthy of national attention, and we can’t wait to welcome fans from Tallahassee and Oxford to Central Florida to start the 2016 season,” commented Florida Citrus Sports CEO Steve Hogan.

And, in what has to be music to the ears of both Dyer and Hogan, there is a forecast for more. “Orlando is a terrific destination, and the renovations to the Citrus Bowl Stadium will provide an outstanding environment for the 2016 ACC Labor Day Monday Night Game,” said John Swofford, commissioner of the Atlantic Coast Conference. “The matchup featuring Florida State and Ole Miss is an exciting way to begin the 2016 college football season. Labor Day night continues to be a special part of our ESPN partnership and an excellent platform for ACC Football.”

The Orlando Citrus Bowl is back … to the future.