Stetson University began fielding a baseball team in 1895, but could there possibly have been a better week for the Hatters than this past one?

First, Mets pitcher Jacob deGrom, who played shortstop for the Hatters but was drafted as a pitching prospect in 2010, goes from the minors at season’s start to Major League stud. On Nov. 10, he was named Rookie of the year in the National League. Two days later, Corey Kluber wins the Cy Young Award as the American League’s best pitcher.

What’s in the water on the quaint Stetson campus in DeLand, Fla.?

From the moment he was brought up by the Mets this summer, deGrom was over the top, literally. With a classic pitching delivery from almost over his head, he fashioned a 9-6 record with 144 strikeouts in slightly more than 140 innings. On Sept. 15, he tied a MLB record by striking out the first eight batters he faced against the Miami Marlins.

Converting from a college infielder to professional pitcher, you could say he came out of nowhere or perhaps came out of left field, as the saying goes. Kluber’s success was only a tad bit more expected. 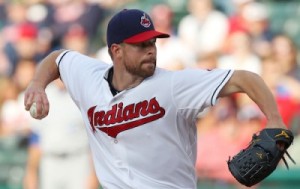 After starring on the mound at Stetson, he was drafted by the San Diego Padres in 2007. He endured a trade and spent four years in the minors before his call-up by the Indians in 2011. His breakout season finally came this year, finishing with an 18-9 record and 269 strikeouts.

Clearly, baseball success runs deep. A total of 10 Hatters have made it to the Majors, with three of them arriving since 2009. (Chris Johnson, third baseman for the Atlanta Braves, is the third.) Stetson Baseball is just the second collegiate program — and first since 1975 — to have two former players win the Rookie of the Year and Cy Young in the same season. That year, Southern Cal’s Fred Lynn of the Boston Red Sox won the AL Rookie of the Year (and AL Most Valuable Player award) and Tom Seaver of the New York Mets won the NL Cy Young award.

Stetson Head Coach Pete Dunn has guided the baseball program for 35 years and was inducted into the American Baseball Coaches Association Hall of Fame earlier this year. Appropriately for Stetson, Dunn has been described as the quintessential teacher.

This month, he has two star pupils who are shining ever so brightly.