Some lessons take time to sink in, and so goes my understanding of soccer. Its faithful take pride in its elegance – after all it’s called the beautiful game – even though they can’t settle on the rules. Yet despite the differences, from one continent to another, people in the hundreds of millions worship the sport that transcends cultures.

Orlando falls within those ranks as 62,358 fans filled the Orlando Citrus Bowl, Sunday afternoon (3/8), to watch the Orlando City Lions open its inaugural MLS season. Another 97,328 fans watched the telecast on ESPN2. They likely understand this yellow card business.

Fans come to know the game as they know a mother’s love. It’s organic. A baby’s cry isn’t about nourishment or a soiled diaper. It’s about being “open along the right side.” Children play as soon as they can walk. Adults live and die with the play of hometown favorites. The elderly talk endlessly of the greats such as Pelé, Zico, Ronaldo, Müller, Beckenbauer, Maradona and Beckham.

As an international game, one might expect a host of languages in a given crowd. Spanish, Portuguese, German, Italian, French and English (the Queen’s version). Flags from various nations flying above the crowd, national team logos adorning shirts and caps, and face paint brightening the cheeks of young fans. But it’s not the foreign influences that make it hard to absorb. Not even low scoring affairs – is 0-0 really an outcome? – or the thought of purple scarves in the July heat.

My lesson began in grade school when the Hispanic boys took one end of the field to play soccer, or what we thought was a disorganized game of kickball, and the rest of us played touch football.  While soccer was interesting to watch we couldn’t work our minds around playing a game without using hands. But day-by-day boys would slip away to try the new sport. French fries were foreign, too, or so we thought, but no one was getting excited over deep-fried potatoes.

Years later I found myself covering professional soccer at the Astrodome. The Houston Hurricane of the North American Soccer League, the forerunner to Major League Soccer, had entered the league as an expansion team and its marquee player was Kyle Rote, Jr., son of Southern Methodist University and New York Giant football great, Kyle Rote, Sr.  During the late 1970s and early 1980s, Junior was the most famous American-born player in the NASL. A high school football standout, he made headlines when he walked away from college football to pursue soccer. Several years later, after an outstanding career with the Dallas Tornado, Junior was playing out his career in Houston.

Now we’re talking a Texas legend and you know how folks in Texas love their legends, but the crowd, or what might be considered the crowd, was far from what we might expect when a legend was present. Willie and Waylon still were pulling Taylor Swift-sized crowds. Even the Houston Astros were putting together a so-so baseball season and drawing 10 times the fans.  Go figure?  So I asked a member of Hurricane management about the turnout.  He said fathers were the key and fathers at the time didn’t know anything about soccer. Fathers wanted to teach their kids and soccer didn’t provide the opportunity.  As such, families attended baseball games. Win or lose. Such was the state of U.S. soccer in the early 1980s.

So I made a pact with myself. I would expose my children to soccer and perhaps speak on tactics as my father would have done during a baseball game.  I already knew the basics from my brief glimpse of the NASL and a handful of collegiate club games played at rodeo arenas. Yes, rodeo arenas. Face-plants should be avoided. Aside from the risks associated with venues trodden by domesticated animals, I knew the hands were off limits, except for the goalkeeper, put the South Americans on attack, the Europeans on defense and, for marketing purposes, two Americans on the bench. I still hadn’t wrapped my head around the yellow card. Then I was told two yellows equaled a red. Please explain the math. 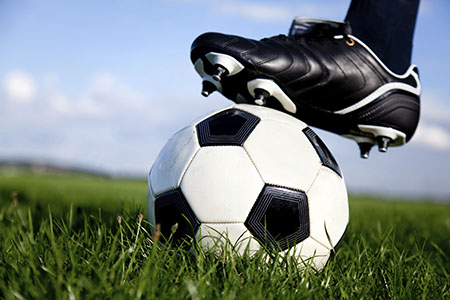 Now flash forward to the present with countless kids’ soccer games under my belt, some as a coach and some as a parent.  In our effort to provide up-to-the-minute coverage of Orlando City’s inaugural game, FORWARD Florida posted a handful of announcements via Twitter to give fans, specifically those who neither attended the game nor watched the telecast, the benefit of the biggest story to hit Orlando since the last biggest story. With Kaká still grinning and celebrating his historic goal and thousands of Orlando fans dancing in the aisles, we posted “Kaká ties game with penalty kick! Nail biter.”  Within moments we received a notification.

“Free kick, not penalty kick,” someone tweeted.  Are you kidding me?

I had an editor long ago tell me to rest easy when a reader submits a Letter to the Editor. It means someone other than my mother read the column. My minister later added those who complained about his sermons at least listened.  As such I couldn’t be upset with the notification because (1) the Twitter follower was correct, (2) they read our tweet so that would be considered a good thing, and (3) my lack of expertise will betray me and betray me quickly if I ever find myself having drinks with a sporting crowd in a Manchester pub or São Paulo bar.

The fact is I still don’t know a pitch from a draw. And though I want to understand, the language of the sport continues to confound me. Perhaps it’s because I’m accustomed to other terminology – for the very same things. Soccer athletes play on a pitch, or so they call it in England.  I call it a field. If you add cows it becomes a pasture.  If you replace the cows with cannon it becomes a battleground. If you replace the cannon with automobiles it becomes a parking lot. I know baseball plays on a diamond and football plays on a gridiron, but deep down I call both a field.

I also understand I didn’t watch a game at the Citrus Bowl but rather a match. Such a friendly term. Let’s have a match as I might say to a competitor.  Perhaps let’s have a “friendly” or a match with no discernible consequences.  Sunday afternoon it sure looked like a game, but apparently it was a match because a dozen fans gave me the stink eye – by the way, stink eye looks the same across all cultures – when I referred to the match as a game. I have to give them that one. Whenever I confuse games with sets and matches at volleyball tournaments, little girls with ponytails and moms in sequined T-shirts savagely turn on me.

Kaká kicked an “equalizer” to bring the match to what would be the final score, a 1-1 draw. I could’ve sworn he kicked a goal, but apparently the ball hitting the back of the net is defined otherwise by soccer fans and the result of his historic effort was an outcome I thought reserved for men mounted on horses with swords drawn, leading ground troops armed with muskets and bayonets.  Either way, a draw in athletics still counts as kissing your sister.  Now correct me if I’m wrong but didn’t we win at Yorktown?  Didn’t we bogart the melody to “God Save the Queen” for “My Country, ’Tis of Thee?”  So why must the match end in a draw? It’s a tie. A deadlock.

Kudos to the local newspaper for trying to educate the masses before the match, and I had to chuckle at the definition of the golden goal.  It’s defined as a goal in overtime that decides the outcome. I know it’s used in other sports but it remains amusing. I call it sudden death. And if sudden death was good enough for Hall of Fame quarterback Johnny Unitas, it’s good enough for me. The sense of urgency is compelling. Sudden death is a fitting outcome.  Any kick – or is it a shot? – can spell doom or success.  The term golden goal has a kitchen appliance sound to it. Then there’s tackling, an attempt to wrest control of the ball from an opponent’s feet without fouling the opponent.  Not the kind of tackle where you bury the halfback with his ancestors somewhere along the 30-yard line. Well, I can’t see why you wouldn’t take a shot if your opponent has the ball.

During Sunday’s match, whenever a player simply approached another, one of the players would go down in agony, pointing to a presumed injury, crying for a foul. The other player, standing above him, shaking his fist in apparent anger, saying things I would imagine are heard regularly at the docks.  Now, I’ve seen rodeo clowns take harder hits, usually from an overwrought bull, but they do it for the entertainment of the spectators.. 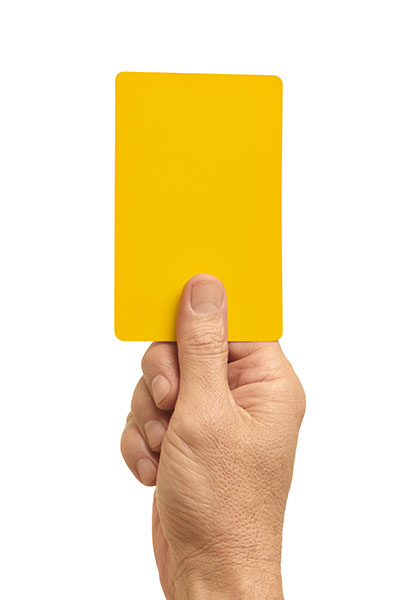 But at a soccer match – see, I got it correct – it’s not the players who are most annoyed.  It’s the fans.  Every time a favored player hit the ground, the adoring crowd rose to its feet, hands on their hips or reaching skyward.  “Come on ref. How about a yellow card?”  Or so I thought as those around might’ve been yelling in Spanish, Portuguese or Southern twang. Yellow card sounds the same in all languages.

And that brings me to the dreaded yellow cards.  Soccer referees really carry these things around. They flash them at players and coaches. Perhaps they flash them at their kids, offending drivers on the road, angry dogs. The first time a referee “issued” me a yellow card – albeit at a kids soccer match – I hardly could restrain my laughter.  Blow the whistle loudly, announce my infraction to the masses, give me the heave ho with the flourish of a major league umpire but don’t wave a bookmark in my face. It’s like fibbing on your sister. Simply not cool.

However, even with my frustration and apparent lack of soccer knowledge, a general misunderstanding of the terminology and a regionally biased preference for the sports I played, I walked away Sunday with a renewed appreciation for its beauty.  Athletes going at it for more than 90 minutes, up and down the field.  Did I read somewhere they can put 7 to 10 miles on their bodies in one match?  And with a draw on the books, the camaraderie among athletes on the field, the appreciation for the chance to compete, was evident.  Even the fans showed a sense of grace you certainly don’t see after a beer-swilling NFL contest.  “Excuse me” and “after you” on the concourse as the multitudes filed out of the stadium.  No trash talking, no verbal evisceration of the referees, simply a happy crowd excited about the MLS and the Orlando City Lions.

Seems a new day has dawned on the City Beautiful as professional soccer has taken its first step on the major league level and augmented a growing professional sports culture. Though a baseball player can knock in more runs with a bases-clearing double, a quarterback can score more points with a well-placed pass to the back corner of the end zone, a hockey hat trick isn’t as rare as it seems and bowlers, of all levels of expertise, can knock back a 10 with a strike, it’s hard to argue the elegance and entertainment of a well-played soccer match.  Even one that ends in a 1-1 draw.  See, I’m catching on.