Of those, only mighty USC – with its record 12 national titles – pulled off what Stetson University in DeLand (enrollment 4,100) did last month when two former Hatter players — Jacob deGrom and Corey Kluber — captured major postseason MLB awards in the same year. DeGrom, now a Mets pitcher who began the season in the minors, on Nov. 10 won the National League Rookie of the Year award. Two days later, Cleveland Indians pitcher Kluber won the Cy Young Award as the American League’s best pitcher. For the record, USC did the trick in 1975 when former Trojans Fred Lynn (AL MVP) and Tom Seaver (NL Cy Young) were winners.

Neither deGrom nor Kluber could be called upset winners, but the fashion in which they won their respective awards was a bit surprising. DeGrom captured 26 of 30 possible first place votes to run away with a Rookie of the Year title that was expected to be a bit closer. Meanwhile Kluber took 17 first place votes to narrowly defeat Seattle ace Felix Hernandez — a perennial favorite — for the Cy Young.

A tip of the hat to both. 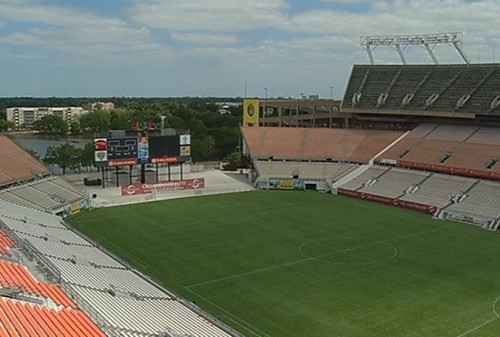 The remodeled stadium’s first game was the traditional Florida Blue Florida Classic between Florida A&M and Bethune-Cookman on Nov. 22. It also will continue hosting the Russell Athletic Bowl (Oklahoma vs. Clemson, Dec. 29) and Buffalo Wild Wings Citrus (formerly Capital One, Missouri vs. Minnesota, Jan. 1) Bowl while adding the Auto Nation Cure Bowl after the 2015 season.

And, the 2016 season will usher in a new tradition: the Orlando Kickoff game. The inaugural game, set for Labor Day, will feature Florida State and Ole Miss.

BOWLING FOR DOLLARS. If college football has become big business — and few would argue otherwise — then the postseason bowl games have been a major driver of that business’ success. Florida looks to be both a giver and receiver in this increasingly lucrative process.

Seven Florida bowls will pay a total of about $30 million to participating teams. The four Super Region bowls — Citrus, Outback, Russell Athletic and Bitcoin St. Petersburg — will chip in roughly $22 million of that total.

As for the Capital One Orange Bowl and the other playoff bowls, the formula there is more complicated and payments go directly to the conferences. According a recent Business Insider article, the “Power Five” conferences (ACC, Big 12, Big Ten, Pac 12 and SEC), will receive $50 million each — even if they have no playoff team — plus $6 million per playoff team and $2 million travel money per playoff participant. The remaining five conferences also receive significant payments, which means additional revenue for UCF and USF.

Most of this money is divided equally among conference members. The three Florida Power Five schools (UF, Florida State and Miami) will receive about $3.6 million each.

FSU ended the season ranked No. 3 and will play Oregon in the Rose Bowl on Jan. 1. The winner of that game will face the Alabama-Ohio State winner in the National Championship Game on Jan. 12.

UCF will play North Carolina State in the St. Petersburg bowl, and UF will play East Carolina in the Birmingham Bowl.

HORSES A HIT(S). The economic benefits of some sporting events (think Super Bowl, NCAA Tournament) are obvious; others can come as a surprise. Count the Ocala-based Horse Shows in the Sun (HITS) in the latter category.

Started by New York-native Tom Struzzieri in Ocala in 1982, the 10-week event set for January through March 2015 now has an economic benefit of $94 million and creates more than 900 jobs, according to an economic impact study commissioned by the California-based Sports Management Research Institute.

One of nine HITS events around the country, the Ocala show generates significant tourist business for Marion County, with 84,000 room nights booked for the show and an average eight-person traveling party that spends almost $2,400 per day while visiting. More importantly, the show generates repeat business (85 percent who attend say they’ll return) and new residents (20 percent wind up buying real estate there).

MARCH MADNESS RETURNS. The NCAA Men’s Basketball Tournament, which had a successful run in Orlando last March, is returning to the Amway Center in 2017. UCF, Stetson and the Central Florida Sports Commission will serve as official hosts of the first- and second-round games, which will tip off March 16 and 18.

Fall, a native of Senegal who came to the U.S. two years ago, credits the recruiting style of UCF basketball coach Donnie Jones as a deciding factor in his choosing the Knights over traditional powers like Georgetown and Wake Forest. How big an impact he will make remains to be seen, but here’s one possible indicator: Fall is four inches taller than any NBA player.

EDITOR’S NOTE: At press time, UF had just announced the hiring of Colorado State’s Jim McElwain as the Gators’ new head coach. McElwain will be paid an average of $3.5 million annually. To buy out McElwain’s contract, UF agreed to the richest school-to-school payment in NCAA history and also agreed to schedule a game against Colorado State – which comes with a guaranteed $2 million payout to the Rams – by 2020.