So, it’s Adam Gase’s turn to try to return the Miami Dolphins to glory.

He certainly sounds like he’s ready for the challenge, despite becoming the league’s youngest coach at 37.

“I’ve been in this profession since I was 18 years old, so that’s really more than half of my life right now,” Gase said when his hiring was announced. “In this business, age is only a number but you get older really quick, because every week’s a growing experience.”

He also comes pretty highly recommended by the last two quarterbacks he’s coached as the offensive coordinator in Chicago and Denver – Jay Cutler and a guy named Peyton Manning.

“He’s an extremely hard worker — a grinder,” Manning told ESPN. “He’s extremely bright on all things football, an excellent communicator and always eager to learn more. He’ll be an excellent head coach without a doubt. He’s ready for this for sure.”

Owner Stephen Ross and others in Dolphins management said all the things you would expect during such an announcement. They, like Dolphins fans everywhere, are hopeful that Gase will be able to put the Dolphins back among the NFL’s elite franchises.

A lot is riding on his success. Ross paid $1.1 billion seven years ago for 95 percent of the team and its stadium. Lately, he’s been fighting for state help on upgrades to the stadium so he can maximize the return on his investment. A consistent winner wouldn’t just generate fan excitement; it would help the bottom line significantly.

The only problem Gase and Ross face is that history is not exactly on their side.

Since the legendary Don Shula was eased out of the head coaching position after the 1995 season, the Dolphins have had six permanent head coaches – three of whom were fired in mid-season – and, obviously, three interim head coaches. Collectively, those nine men have won 157 games for the Dolphins.

Four of the six permanent head coaches had losing records. That includes Nick Saban, who has enjoyed phenomenal success at the college level. Jimmy Johnson, the man for whom Shula was encouraged to retire, finished all of eight games above .500 during his four seasons at the helm (though Miami did make the playoffs three of those years). The man who had the best post-Shula record? The oft-reviled Dave Wannstedt, with a .575 winning percentage in four and a half seasons.

Is Gase the man? Some would argue that his success as an offensive coordinator for the Broncos and Bears might have a lot to do with the quarterbacks he had on those teams. Cutler is a highly respected passer and Manning is one of the greatest QBs in the game’s history. Those skeptics might say Cutler and Manning could coach themselves but such a statement overlooks the fact that both had their best seasons statistically under Gase.

It also overlooks Gase’s amazing job as Denver’s quarterbacks coach in 2011, when he somehow squeezed a division title and playoff win out of Tim Tebow, whose NFL career crashed after he was separated from Gase’s tutoring.

As for his age, here’s another historical tidbit. In 1963, the Baltimore Colts hired Detroit’s relatively unknown 33-year-old defensive coordinator to be their head coach. Many “experts” scratched their heads at why such a successful franchise would hire someone so young. That 33-year-old’s name?

Gambling or not on Fantasy Sports?

On Tuesday (Jan. 12), a Florida House panel approved a plan that would protect the fantasy sports industry from state gambling laws. HB 707 passed by a vote of 10-3 in the House Business & Professions Subcommittee. Next stop is the Regulatory Affairs committee. Bill sponsor Rep. Matt Gaetz, R-Fort Walton Beach, has said he will work on amendments involving background checks for operators of online fantasy sports organizations as legislators have raised concerns about regulations.

There has been much debate on this topic. California also had a Daily Fantasy Sports bill pass through committee last week.

New York-based DraftKings and Boston-based FanDuel, are the two big players in the D.F.S. industry, controlling 95 percent of the market in the U.S. As of September, each company was valued at more than $1 billion and they have been embroiled in legal battles across the country.

A lot of eyes are on Florida and the stakes are high.

When NFL owners granted the Rams permission earlier this week to return to Los Angeles, enterprising reporters quickly sought out Jaguars’ owner Shad Khan to ask if he had an interest in moving the Jags to St. Louis, the city the Rams are leaving. The question was not unreasonable; Kahn had tried to buy the Rams several years ago but lost out to current owner Stan Kroenke. 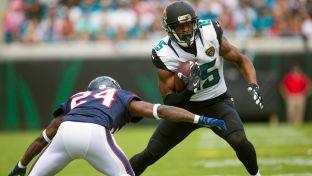 “I really believe in fate or destiny, and I believe the Jacksonville Jaguars were my destiny,” Khan told NFL.com’s Coner Orr. “I believe, when it’s all said and done, it couldn’t have worked out better for me … man, oh man, this was just perfect.”

Ironically, there was a time a few years back when people speculated about the Jaguars moving to L.A., but roughly half the teams in the league were mentioned as possible candidates to move there during the two decades the nation’s second-largest market was without a team. Many of them used the threat of Los Angeles to wrangle new stadiums from their cities.

In the end, the three teams to emerge as viable candidates to move to the City of Angels had all been located there at one time or another: the Rams, Raiders and Chargers. The Rams’ proposed $2 billion stadium won the day.

The league has given the Chargers an option to join the Rams there within a year. That would leave the nation’s eighth-largest city without an NFL franchise. Hmmm . . . Wonder if anyone thought to ask Khan about San Diego?