For the Tampa Bay Lightning, this isn’t quite Steven Stamkos (the leading scorer, pictured above) from Victor Hedman (the top assist man) for a goal. But the teamwork is certainly worthy of applause.

In late September, the Lightning and the University of South Florida launched a new initiative aimed at connecting area business professionals, as well as creating additional value for Lightning business season ticket members, partners and suite holders. Highlights include networking opportunities and events hosted by the Lightning and USF.

The Bolts Business Alliance has charged on to the scene by attracting roughly 800 members. All corporate partners of the Lightning, suite holders and business season ticket holders were invited to join the free club. The response has been overwhelming, according to Jarrod Dillon, Tampa Bay Sports and Entertainment executive vice president of sales and marketing.

“Following the announcement, we wanted to build a base. That has happened very quickly,” he says. “Some Lightning fans may not have known they were sitting next to potential business partners while enjoying a hockey game at Amalie Arena. This alliance will enable them to connect. It’s been a big win for everybody.” 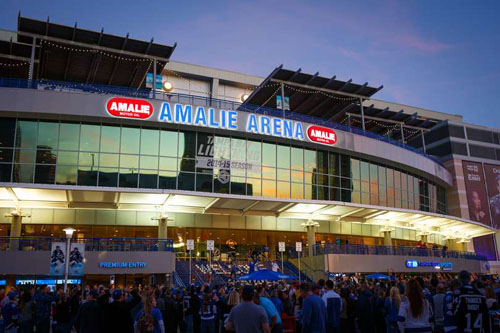 Dillon adds that given the downtown Tampa location of Amalie Arena, the Lightning’s home, and the success of the team, which made it to the Stanley Cup Finals last year, the Lightning are at the “epicenter” of area businesses. As such, they can be a galvanizing economic force. In turn, USF brings expertise and insight about numerous business topics and trends, along with access to education programs and specialized training. Previously, the Lightning and USF have partnered on several initiatives, most notably USF’s Sport & Entertainment Management MBA program.

“The new Bolts Business Alliance will create opportunities for our region’s leaders to collaborate and forge partnerships that will maximize our community’s strengths and create new opportunities for the Tampa Bay region,” comments USF System President Judy Genshaft.

The first event is planned for Dec. 16 at Amalie Arena, but Dillon declined to release details until official notices are sent out to Alliance members in the coming days. (Guest speakers about hockey and business are expected.) A total of three events are planned over the next year.

In addition, marketing consultations with the Lightning marketing team will be complimentary, and a dedicated page will list all members of the alliance, among other benefits.

Finally, there is an ROI factor, too. Tools are being created to monitor investment return, so members can assess what their hockey tickets have done to their business’s bottom line. 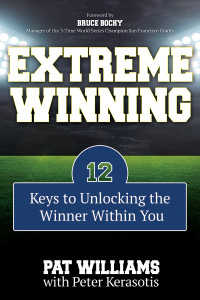 The book, written with longtime columnist and author Peter Kerasotis, was inspired by Williams’ 57 years in college and professional athletics. During that time, he observed firsthand some of sports’ greatest stars, discovering what it takes to be a winner, in sports, business and everyday life. Williams’ observations conclude that all winners share 12 characteristics and do them to an extreme. This centennial book focuses on developing that mindset.

“I guess you’d say I’m a builder and a risk-taker. I always wanted to max everything I could out of life and I still do today,” says Williams. “That’s really what this book is about: max it out. What I’ve learned from all of the greats with whom I’ve had the honor of crossing paths is that they go to the extreme to be an all-time winner. They have an extreme dream, which fuels their unbridled preparation, laser focus and unbelievable work ethic.”

Count Williams among them!

The discussion got a little contentious at times, and some outside-the-box proposals were presented along the way, but on Thursday (Nov. 12) the City Council gave the green flag to extend the Grand Prix of St. Petersburg through 2020.

The Council had to sort through a number of competing proposals to revamp the race, which has a $48 million  economic impact, and reach a few compromises with race owners but the three-year extension ultimately was approved. Perhaps the biggest stumbling block was a proposal by some Council members to have the city assume ownership of the race, but that plan ultimately was rejected both for liability reasons and because the city has no expertise in this area.