Economists might disagree with our reasoning, but – at least as far as Marlins Park in Miami is concerned – the debate about public funding of sports stadiums should be settled. It’s a great thing – at least in one major respect.

Yes, we know it cost almost $650 million to build the stadium, that taxpayers picked up more than 80 percent of the tab and by the time the bonds are repaid the real price tag could be more than $2 billion. We’re also aware it had a huge impact on the City of Miami mayoral election of 2009 and was a major factor in the 2011 recall of the Miami-Dade County mayor.

Despite all of that, on Tues., July 11, the stadium will in the eyes of many pay for itself because . . . IT BROUGHT THE ALL-STAR GAME TO FLORIDA (for the first time ever)!

Let there be no mistake about it, when it comes to professional sports all-star games, no one does it better than Major League Baseball. If there is a debate about that, it is only among those who are delusional. The NBA and NHL all-star games are nice enough, but they really are only for hard-core devotees of the sport, and the NFL’s Pro Bowl is basically pretty lame (sorry, Orlando). Don’t believe us on this last point? Just look at the costumes (um, uniforms) they wear.

The MLB-All Star Game (ASG) is pure because it so closely resembles the games that are played every day of the regular season, except with stars at every single position. Defense virtually disappears in the NBA and NHL events, and they might as well turn the Pro Bowl into a flag football game (last shot, we promise).

The game was born in 1933 at Chicago’s original Comiskey Park, the brainchild of Chicago Tribune sports editor Arch Ward and played in conjunction with the 1933 World’s Fair. It has been blessed with a sense of history from the outset. Who hit the first home run in ASG history? Babe Ruth, of course. Could it have been anyone else?

The next year, National League pitcher Carl Hubbell in succession struck out Ruth, Lou Gehrig, Jimmie Foxx, Al Simmons and Joe Cronin – arguably the five best hitters in the game at that moment. Where else in sports can you possibly see something like that?

Over the years there have been other legendary moments:

These are so many more memories we could recount here, and that’s another part of the ASG’s beauty: There are so many individual moments that fans talk about years later. Name us a single famous play from a Pro Bowl (oops, just broke our promise).

It’s a game with a rich amazing history, one that is coming to Miami this week.

Baseball ultimately is a business, though, and the ASG and related events such as the Home Run Derby and the FanFest that kicked off Friday, have an economic impact that can’t be ignored. The Baseball Almanac website has tracked the reported impact of the last 20 games, and it ranges from $40.5 million to $80 million for games not played in New York City (the numbers there are not comparable because of the market size). Most articles about the Miami game expect the economic impact to be at least $80 million.

It won’t pay off $2 billion in bond debt by itself, but it helps. And, for one night who really cares? It’s the All-Star Game, and it’s in Florida for the first time. 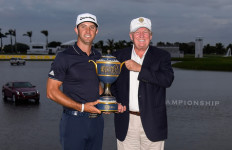 Doral and The Donald→