Brevard County’s Project Magellan is a case study in bringing the deal home.

In May, with much fanfare, Northrop Grumman Corp. announced the intention to bring a critical segment of its Defense Department-related business to Florida. As many as 1,800 high-paying jobs and $500 million or more in infrastructure and equipment investment would go into a secret military aviation program housed at Melbourne International Airport.

Aside from the airport, many economic development entities stepped up to secure this opportunity for Florida and Melbourne — from the EDC of Florida’s Space Coast to Enterprise Florida, CareerSource Florida, CareerSource Brevard and others, who each played a critical role in bringing the opportunity to fruition. Yet one entity was especially low profile in all the hoopla: Space Florida, the state’s spaceport authority and aerospace economic development agency. Space Florida often plays a behind-the-scenes role in big projects of this nature. This time was no different.

“We knew this was a significant deal for the area, and we were fine with showcasing the team as opposed to promoting our individual involvement,” says Space Florida President Frank DiBello. “We have a great working relationship with Northrop Grumman executives and were pleased to see so much interest in this project, which was years in the making. We wanted to let the news die down a bit before talking further about our role, because to us it’s really a bigger story of our state-given capabilities that make many deals like this possible.” 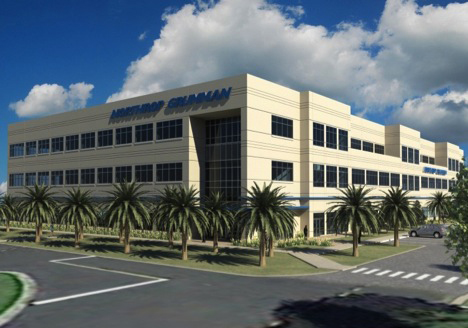 There were many reasons Northrop Grumman selected Florida. There were the typical reasons, such as Florida’s unique combination of existing, abundant aerospace businesses and a capable workforce, combined with a seasoned aerospace supply chain and low tax base. Those elements certainly give the state a competitive advantage when it comes to luring companies that wish to consolidate or grow their operations. But, there was much more needed to win a project like Magellan.

It was a perfect alignment of the economic development planets.

When you look behind the curtain at Project Magellan, you see a lot of teamwork you may not have expected. For example, the State of Florida (Executive Office of the Governor, Enterprise Florida) had key relationships with Northrop Grumman site consultants. “If they don’t know you, you don’t get the call,” notes Keevin Williams, Space Florida vice president of special projects and strategic initiatives. “Florida was not originally the location Northrop was evaluating, but by maintaining relationships with site selectors we were able to communicate the real benefits of establishing the site here in Melbourne.

“These are rare deals … . We haven’t seen an opportunity of this size in terms of job creation and economic impact potential in a long time.”

Northrop already has a presence at Melbourne International Airport, running the J-STARS Program from the airport as well as a Manned Aircraft Design Center (Project Blue) announced in 2013. These two programs alone give the company more than 1,000 employees at the airport. Yet even that wasn’t enough to drive the project to Melbourne.

For mega-deals today, companies require a single agreement with all participating entities. Not an easy task, given there were 11 public entities involved. One can only imagine the complexities of creating the terms for one development agreement. Communities that can’t do this, and there are many, are simply not competitive.

Then there is the issue of confidentiality, being able to demonstrate the ability to maintain discretion among numerous public records requests. Simply having a $20 million-plus “mystery deal” on state record for discussion, promising to make millions in capital investment, is enough to get any reporter fired up. All 11 parties, however, worked together to keep rumors at bay.

In competing for a major Defense Department award, Northrop obviously was sensitive to price points and looking for a low-cost environment to make a significant long-term investment. This is where Space Florida came in.

Not many economic development organizations have the robust charter Space Florida has. The ability to create tax efficiencies (including local and federal), as well as to provide conduit financing and unique leaseback terms that can save a company like Northrop millions of dollars in the coming years, put Florida in the best position to prevail over fierce competition from other states.

Over the past few years, Space Florida used these advantages to facilitate some of the area’s largest development projects. They include Project Redline, a partnership with Embraer that will result in a state-of-the-art Aircraft Interior Research & Development Design Center of Excellence, and the conduit financing of the Cape Canaveral Air Force Station launch infrastructure leased by United Launch Alliance, the company that launches many of our nation’s most important communications satellites into space. Most recently, the Space Shuttle Atlantis exhibit at Kennedy Space Center Visitor Complex (a nearly $100 million project) was enabled through Space Florida’s conduit-financing capabilities.

Space Florida will facilitate much of the financing for the development of new infrastructure and equipment leases for the Northrop Grumman project, which will occur in two phases.

In Phase 1, there will be construction of a new facility in Melbourne that the company will lease from Space Florida and place as many as 500 new employees. The company will begin to hire new employees immediately. In Phase 2, multiple additional facilities will be constructed and owned by Space Florida and leased back to Northrop. The company projects long-term employment of approximately 1,800 workers by 2020.

In the end, you have the significant tax savings, state-level certified capital investment tax refunds and an affordable, highly skilled workforce. Florida attracted Northrop in large part because of the compelling economics.

After years of hard work, Florida and Melbourne won, out of more than 20 other possible locations under consideration nationwide. That’s impressive. And Space Florida had a significant role in that win.

* This article was printed as “Landfall in Florida.”