The University of Central Florida hosted U.S. Secretary of Commerce Penny Pritzker and Sen. Bill Nelson at a press conference on Mon., March 30, at the school’s Orlando campus. And the news was good for the nation’s second-largest university.

UCF is one of only two institutions to receive both an i6 Challenge Grant and a Cluster Grant for Seed Capital Funds from the U.S. Department of Commerce. The money, almost $750,000, will benefit entrepreneurs and engineers across five counties in Central Florida: Orange, Seminole, Brevard, Osceola and Volusia.

While making the announcement, Pritzker praised the school’s comprehensive approach to innovation and entrepreneurship. “UCF has mechanisms for supporting local startups all along the way.”

These include mentoring programs, grant proposal assistance and seed money. Pritzker described UCF’s approach as well developed and deserving of both grants.

“This achievement recognizes the university’s leadership in using innovation and commercialization to help Central Florida recover from the downturn in this region’s manufacturing sector,” she said. 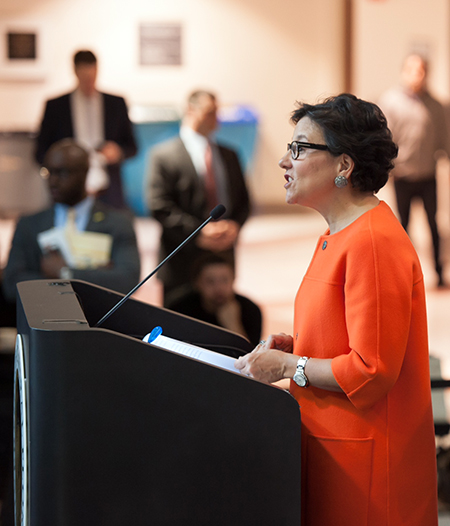 Nelson commented, “At UCF, entrepreneurs and potential entrepreneurs can now come together from the ground up with help to commercialize their ideas.”

Pritzker noted the key role entrepreneurs play in building the nation’s economy. “About 65 percent of jobs created in the U.S. over the last 20 years were from small businesses and startups,” she said. “We also know a third of our economic growth since 2009 has come from innovation.”

The $500,000 i6 Challenge grant will help fund UCF Maker Space labs and the UCF NSF I-Corps Site program that transforms new technologies into new businesses. Another $500,000 will come in matching funds.

Seed Capital’s grant of $249, 033 is for early-stage entrepreneurial funding for technology and advanced manufacturing startups.

The success of UCF’s I-Corps project was a major factor in the awarding of both grants. I-Corps is led by Thomas O’Neal, associate vice president of the Office of Research and Commercialization at UCF.

“This is an exciting day for UCF, the region and the state,” said O’Neal. “These grants will enhance our ability to help more future entrepreneurs across the five counties we serve.”

The press conference took place at UCF’s College of Engineering and Computer Maker Spaces. Created with the help of industry partners, it’s designed to help teams of innovators through idea, design and prototyping. O’Neal estimates that in the fifth year of the program, 195 companies and 1,730 new high-wage jobs will be created through the Maker Spaces teams.

The Department of Commerce is awarding a total of $10 million in grants to 26 universities, nonprofit organizations and municipalities across the country from its Regional Innovation Strategies Program. It’s run by the Department’s Economic Development Administration’s Office of Innovation and Entrepreneurship. Grants for Science and Research Park Development have yet to be awarded but will be announced soon.