Fueled by the energy and spirit of twenty-somethings, three ambitious companies have taken flight from their respective university campuses. 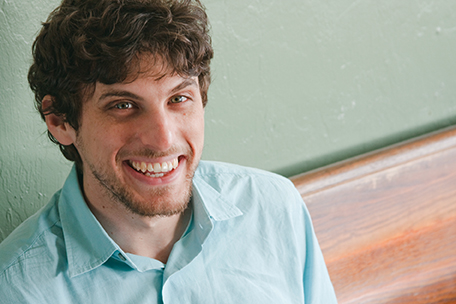 When you look up “Entrepreneurial Spirit” in the dictionary, you just might see Amir Rubin’s face. He cofounded his first company, Prioria Robotics, during his undergraduate career at the University of Florida. Since then, he’s become the CEO of Paracosm, a startup company with a laundry list of accomplishments, including being a development partner on Google Project Tango. Paracosm was started in January 2013. “We worked in stealth mode for the first seven months, working in secret to develop our 3D mapping software,” Rubin says.

Not only is he smart, he’s wildly enthusiastic: “Our goal is to eventually allow robots and augmented reality to use these 3D maps to easily navigate and interact with their environment.” Now backed with a team of 18 people, the company has embarked on the process of running beta tests and pilot programs with NASA Langley in Virginia and the Department of Transportation in Washington, D.C.

Noting that “finding investments to keep the lights on is always a fun challenge,” Rubin says he has received capital from SoFla Angels and Tony Hsieh’s Vegas Tech Fund, with donations matched by the Florida Institute for the Commercialization of Public Research. (See Page 24.)

While Paracosm has made huge strides in the past year, the company’s ambition extends beyond. “We have not made it yet,” he concludes. “When every place on earth is 3D-ified. When robots roam the earth and augmented reality apps allow visually impaired people to navigate buildings, then we might say we’ve made it.” 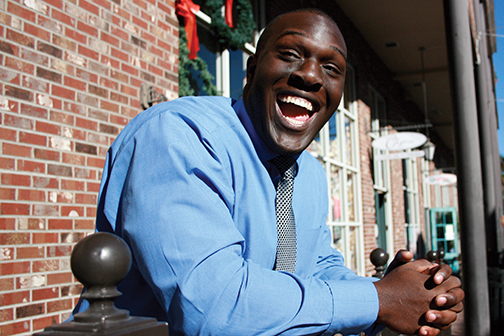 Oluwafunola Falade is a first-generation American with Nigerian roots and quite a confounding name.

“No one calls me that, not even my mother. Everyone calls me Fun,” he says, flashing his trademark smile.

The name sure fits his personality. Fun is an effervescent University of Central Florida graduate in advertising and public relations at the Nicholson School of Communications. He recognized a deficit in the nonprofit industry, where its fundraising and merchandising needs often weren’t met. With a heart for organizations that seek to “make the world a better place,” he went full speed ahead with Quarterwear, a company that partners with nonprofits, charities and foundations to operate merchandise campaigns and create limited-edition outerwear to raise both funds and awareness.

“The people who don’t care about the statistics and want to change the world deserve an ovation,” he says.

Fun credits his success to the UCF Blackstone LaunchPad, a student-oriented organization that promotes entrepreneurship powered by the UCF College of Business Administration. Fun became its first student hire. Blackstone ran a series of seminars called “Launch Your Business in 10 Weeks,” which helped him transform his company from idea to reality. “I was working for a startup, learning about startups and building my own startup. It was a totally immersive experience,” he says.

The road to success hasn’t always been smooth for Fun and Quarterwear. Yet, while the launch tested his business model’s ability to expand, it also brought rewards. Initially listed as an alternate for the Business Model Competition at UCF, he went on to receive $3,000 in seed funding. Also, Quarterwear’s business model won the annual Joust Business Plan Competition conducted by UCF’s Center for Entrepreneurship Leadership, earning $75,000.

Despite his success, Fun hasn’t lost sight of why he started Quarterwear. “I love storytelling and sharing the stories of the companies that change the world,” he says. 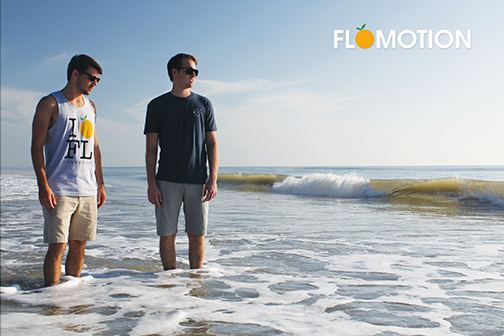 It all started on a drive to the beach. Surfboards in the back, Sean Kinberger and Camille Canters realized there wasn’t a brand that accurately depicted Florida’s lifestyle — most surf/skate oriented brands are based out of California and New York. The Stetson undergrads wanted a clothing line that embodied their way of life and took the paradigm “do what you love” to another level.

Flomotion was born in 2010 and has since blossomed into a very popular Florida retail brand.

Showcased in Flomotion’s clothing line, minimalistic designs express Florida’s laid back, yet active lifestyle. The budding entrepreneurs combined their degrees in digital arts and finance to start the business and learned about retail on the fly. Call it a labor of love.

“Neither of us knew much about the industry and how the buying process worked,” concedes Sean Kinberger, creative director and co-owner.

Four years later, the surf and skate apparel company can be found in dozens of shops across Florida as well as online (flomotion.com).

The guys have traded dorm rooms for an office two blocks from Jacksonville Beach.They are now fixtures in the surfing community and familiar faces at the Surf Expo, held twice yearly in Orlando and attracting some 26,000 retailers, exhibitors and media per show. At the same time, Kinberger and Canters report that contacts made at Stetson were invaluable in building their  business from the ground up.

Advice for budding entrepreneurs: “A setback is a setup for a comeback,” Kinberger says. “You can’t let the little things stop you from reaching your goals.”

This article was printed as “Young & Relentless.”