Community Building to Beat the Competition

My husband and I started Florida Swim Network (FSN) in 2011 as a website that live streamed and covered news on competitive swimming in the state of Florida. He’s a swim coach, my son a swimmer, so it made sense I would turn my blogging and social media skills to an activity that consumes so much of my family’s time.

Since its inception, FSN has grown into one of the largest swim websites in the country. Our swim meet broadcasts regularly attract tens of thousands of unique viewers tuning in to see the live stream and its replays. 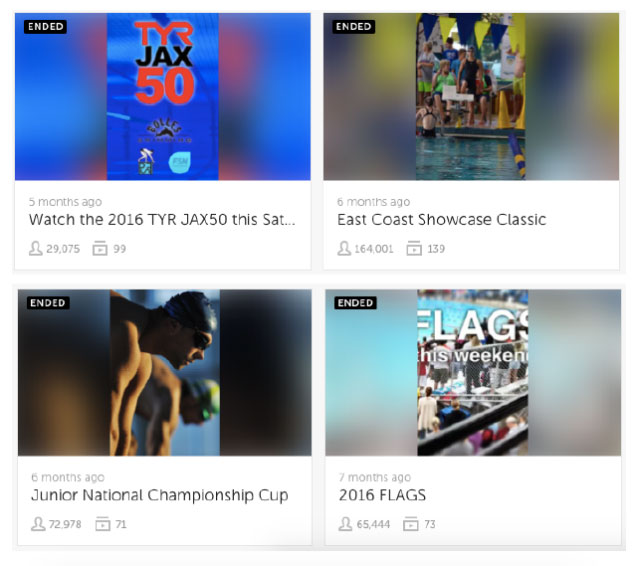 FSN came along when live streaming sports was in its infancy.

We were at a swim meet where Ryan Lochte was competing and I asked if I could set up a camera poolside and commentate the action. Coaches and swimmers took notice and started texting extended family and friends to tune in to see them swim. We had more than 300 viewers that first meet without even advertising! This is how we knew we were on to something.

We became a “grassroots movement” as swim team parents offered to man cameras, donate equipment, or help commentate. When we traveled to away meets, other team parents would volunteer to help. Our community grew exponentially as word spread from team to team that people could watch the swim meet online and, better yet, the swimmers could get back home and watch themselves swim.

Soon we had coaches offering to commentate or do interviews for us on their iPhones. We even had “athlete reporters” as the swimmers themselves interviewed each other at major meets such as the World Cup in Dubai. Recognizing the strength and depth of our community, the University of Florida asked us to live stream their swim meets, showcasing the Division I program.

I believe the real differentiator for FSN, though, is how we approach our broadcast. It’s not television, so why treat it as such? Our broadcasts have an active chat room where viewers ask our commentators questions, and our commentators answer back right on air. Over the years we’ve become friends with our viewers, making them feel a part of the swim meet experience.

We have grandparents in South Africa that tune in again and again to talk with us like old friends. Parents who serve overseas are able to watch their children swim and give them a “shout out.” It is the personal connection we have with our audience that is the difference.

When we first started streaming meets, not many people had the know-how to do it. The internet was sketchy, equipment cumbersome, encoding difficult. Fast forward five years and technology and viewing habits have changed remarkably.

Viewers now expect to find their favorite sport being streamed somewhere. Networks such as ESPN have signed deals with college conferences to have exclusive streaming rights. Over the Top Television (OTT) like Netflix and Hulu are becoming the norm.

Add in Periscope and Facebook Live and now anybody can live stream, so FSN has had to make changes. Now, instead of streaming the Gators on our own platform, we are the paid broadcasting team for ESPN. Since the NFHS Network has exclusive rights to broadcast high school swimming, we now opt to do a pre-swim meet show for high school and college on our own platform similar to ESPN’s “College GameDay” featuring Lee Corso.

But the main thing that allowed us to stay ahead of the competitors is that we’ve spent five years building and fostering our community by constantly engaging with them. As successful Orlando entrepreneur Gregg Pollack said, “You won’t be the first to have this idea; others will try it, too. You just have to be the absolute best at executing it.”

We have embraced community building and it has made all the difference for FSN.

Auer is the co-host of Blog Talk TV and founder of FLBlogCon. She is also the owner of Florida Swim Network and has recently launched Your Swim Channel for Apple TV.