The decision to bring back Stetson Hatter football has scored big for both the university and the local community.

When Stetson University took to the football field in fall 2013, it marked the beginning of a new era, ending a 57-year absence from competitive collegiate football. The decision to bring football back to Stetson was a strategic one, and so far it has paid major economic dividends for both the university and the City of DeLand.

The Hatters have been a hit. 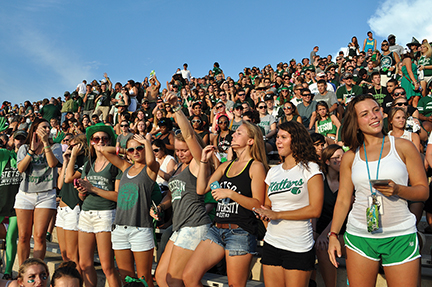 “We had a big decision to make in 2009, which was a difficult year financially for the entire nation,” explains Robert Huth, Stetson’s CFO and vice president for business. “The school had excess capacity, so we had to decide whether to shrink or grow. And if we did decide to grow, how should we do so?”

Stetson leadership ultimately decided to grow by expanding the athletic department — adding a football team as well as women’s sand volleyball and lacrosse teams. Officials also decided to make cosmetic improvements to the campus to match the quality of its academic programs and expand student recruitment efforts. The goal: to reach a student enrollment of 3,000 by 2016 while enhancing both the quality of its curriculum and diversity of its student body.

Thanks in large part to the buzz created around football, the university is already closing in on 3,000 students enrolled for fall 2014. In fact, the school has seen a 125 percent increase in applications, an increase in campus visits by 1,800 people (with out-of-state campus visits up by 114 percent), student enrollment up by 30 percent and a 35 percent rise in tuition received.

“What this has translated to is a huge economic boon for the entire community,” says Huth. “Restaurants, retail shops and hotels in and around DeLand have all benefited from the fact that locals, as well as the players, families and fans from the opposing teams, have come to the games and spent money in the community.”

In year one, the football program had an economic impact on the local community of $250,000. That total represents an impressive start and, like the football program, will continue to improve over time, according to Stetson Athletic Director Jeff Altier. He believes a winner on the field isn’t far away. 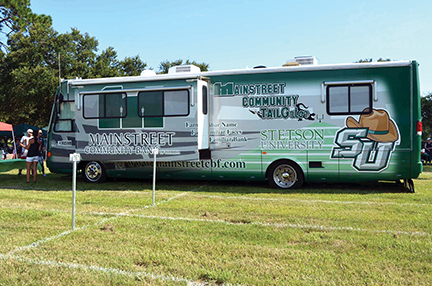 The Hatters posted a 2-9 record in their first year in the Pioneer Football League but, more importantly, Altier saw his team compete at a higher level than he expected. “The energy and excitement created by the entire student body, as well as the faculty, staff and local population, have been palpable. And the players have shown an incredible desire to compete at a very high level,” he says “These are the ingredients that help build a successful program.”

Despite a losing record (to be expected in the first year of any new sports program), the projected game attendance of 2,100 more than doubled, with an average 5,500 fans attending each game. Stetson originally set aside 500 season tickets; 900 were sold to students alone. Alumni have joined in, too.

“Stetson and football were two words I never thought would be spoken in the same sentence,” says Victoria Longo, Stetson University alumna. “Now that we’re gearing up for our second season, I couldn’t be more proud to cheer on the Hats. Stetson football has brought a sense of loyalty and tradition, which was lost for a while, back to the university. The excitement before a game, when everyone is tailgating, is contagious. Go Hatters!” 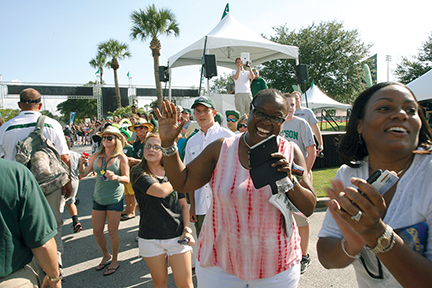 To further accommodate the larger crowds, in late June city officials announced roughly $4.2 million in improvements to Earl Brown Park, which sits near Spec Martin Memorial Stadium, where Stetson plays. Planning began in 2009 when talk of Stetson football emerged. Officials sought ways to completely enhance the park — essentially making this phase two of upgrades to the area, which started with the renovation of the football stadium in preparation for Stetson football.

Huth credits the entire community for the success of the program.

“The partnership that was approved in 2011 with the City of DeLand for shared use of Spec Martin Football Stadium at Earl Brown Park was critical to this endeavor moving forward,” says Huth. “There were a lot of moving parts required to make this work, but the cooperation put forth by everyone in the community made this happen. As a result, the entire Stetson family, including the City of DeLand, has something to cheer about.”

And economic benefits in the end zone.

This article was printed as “Back in the Saddle.”

Jack Roth is a communications veteran with more than 20 years experience in various disciplines including as a magazine editor, web content provider, book author, textbook and technical writer, and documentary film producer. His goal is to continue to learn, grow and explore through his work. Jack’s specialties include: Writing and Editing; Ghostwriting; Publication Planning; Creative Development; Media Relations; Research; Storytelling.