The waves between South Beach and Virginia Key (near Key Biscayne) were threatening. For five decades, the Miami International Boat Show had been anchored at the venerable Miami Beach Convention Center.

Then an announced move to a new location some 16 nautical miles south prompted mounting ripples of contention. Both the City of Miami and the National Marine Manufacturers Association, organizer of the boat show, came under attack by Key Biscayne officials over environmental concerns stemming from the expected crowds totaling roughly 100,000 people. The move was prompted by expansion of the convention center, which would have reduced the boat show by 75 percent.

Now following lengthy debate, along with permit approvals from Miami-Dade County Board of Commissioners, Florida Department of Environmental Protection and the Army Corps of Engineers, the 75th Progressive Miami International Boat Show is on — set for Feb. 11 to 15 at the Miami Marine Stadium Park and Basin.

In conjunction, Strictly Sail Miami is scheduled at the same site as last year, the Miamarina at Bayside.

As you might expect, the boat show is highlighted by everything from powerboats, cruise liners and yachts to runabouts and fishing trawlers. In addition, the show features the newest boating technologies, gear and accessories, among numerous other items in the marine and boat industries. The Miami Marine Stadium, renovated by the City of Miami for approximately $16 million, will accommodate 1,200 boats, while a newly built, adjacent marina will have space for another 700 boats.

Meanwhile, Strictly Sail Miami encompasses more than 125 sailboats, dozens of daily seminars and the latest in sailing, with access from Miami Marine Stadium Park & Basin via free water taxi or shuttle bus service. In all, there will be roughly 600,000 square feet of exhibitor space displaying marine products at the two sites.

“This will be a beautiful show,” says Cathy Rick-Joule, vice president of boat shows at the National Marine Manufacturers Association. “A blank slate really provides you the opportunity to build the show you want versus living with the boundaries of a building. … This will basically be a one-stop shop.”

The backdrop of the big show is a robust boating scene nationwide, with Florida squarely in the middle. Approximately 90 million Americans went boating last year, according to the NMMA, and Florida ranks third among states in activity. Fishing is the No. 1 recreational boating activity nationwide, followed by water sports. Florida, of course, factors significantly in each.

You get the picture. Pretty smooth sailing out of previously turbulent economic waters.

Not coincidentally, the impact of the Miami International Boat Show roars like a Super Air Nautique G23. The estimated annual jolt to Florida’s economy is $597 million in Florida (nearly twice more than hosting a Super Bowl). Out-of-town visitors are expected to spend $83 million during the five-day show, which directly supports an estimated 6,500 jobs. They arrive from all 50 states and more than 80 countries; 25 percent of attendees are international. 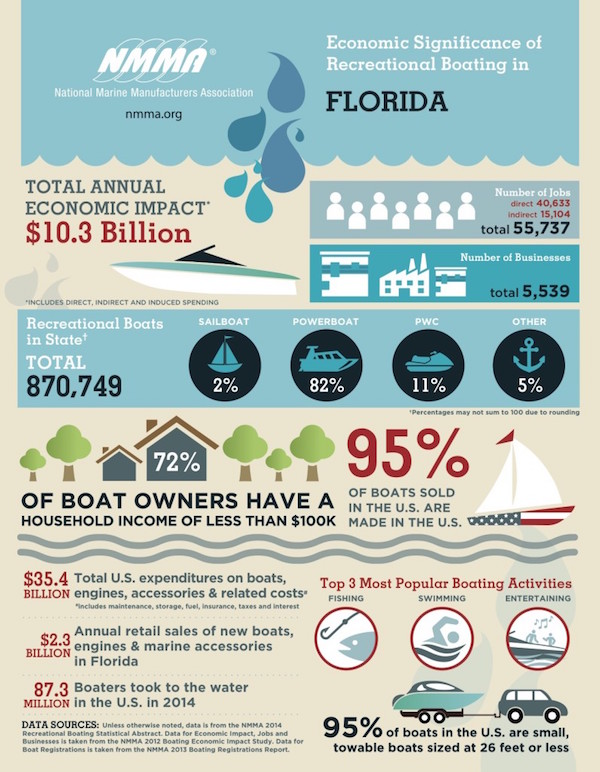 Users can customize settings on the fly and save them in a personalized profile that stores and automatically engages, for example, their preferred speed.

In addition, Nautique’s surf system is integrated with WAVEPLATE® technology, giving surfers the ability to create a wave on either side of the boat. When deployed, the WAVEPLATE extends outward and down, intercepting and redirecting the flow of water to form a surf wave. Also, waves can be customized with variable intensity settings that adjust wave steepness and shape by controlling exactly how much the plate is engaged.

This is surfing, not wakeboarding or waterskiing.

More tech innovation — from manufacturers like Sea Ray, Boston Whaler, Sea Hunt and Scarab — comes in the form of Axius joystick piloting for full 360-degree, controlled movement. The system is designed for twin-engine fishing boats measuring 25 feet and more. There are also autopilot features and touchscreens, along with SmartCraft® technology, a suite of digital technologies that are fully integrated and coordinated.

Just don’t use autopilot to get to the show. Instead, head to the Rickenbacker Causeway then look to the water.