Just how big an economic impact will the September release of Dolphin Tale 2 make in Clearwater, where the movie was filmed? Following the 2011 release of Dolphin Tale, the area realized a $580 million economic impact in 2013, according to local officials. And, as a result of the first movie, attendance at the Clearwater Marine Aquarium quadrupled to about 750,000 annual visitors last year, with 300,000 of those visitors traveling from out of state. If those tallies hold up for the sequel, quite an ROI can be expected. The state contributed $5 million to the movie’s production company (Alcon Entertainment) as an incentive to make the film, while $4 million came from the Florida Department of Economic Opportunity and $1 million from the Florida Department of State.

ORLANDO NO. 1 FOR JOB GROWTH

In the most recent ranking of U.S. cities for job growth by Forbes magazine, eight of the top 10 are located in the West. But the leader is smack in the middle of Florida: Orlando. That’s according to data from the U.S. Bureau of Labor Statistics, which measured cities and metro areas of at least one million workers. Orlando registered annual job growth of 3.7 percent to date in 2014, more than double the national average. Florida placed fifth for statewide job growth at 2.9 percent.

For an unprecedented third time, Orlando, Inc. was reaccredited by the U.S. Chamber of Commerce with five stars. Of the 7,077 chambers of commerce nationwide, only 213 are designated as accredited, representing the top 3 percent of chambers in the country. Orlando, Inc., is one of just 89 chambers that have been awarded five stars — the highest level of accreditation in the program’s three-tier system, meaning it is in the top 1 percent of all chambers nationwide. Eight of those are from Florida, including chambers of commerce in Gainesville, Brandon, Lakeland, Manatee, Melbourne and Ocala/Marion County.

The St. Petersburg Arts Alliance needs you — well, specifically the input of local artists and creative businesses on an economic impact survey designed to demonstrate the value of nonprofit arts organizations to the city. The most recent survey, completed four years ago, showed arts were the fifth-largest economic engine in Pinellas County. Officials expect the impact to be even greater this time.

During November, the Blue Ocean Film Festival & Conservation Summit brought in 100 films and 120 speakers, which attracted thousands of visitors (read economic impact) to the city. As part of joint promotions with several groups such as Visit St. Pete/Clearwater, the city kicked in $25,000. Smart move. For example, more than 1,000 tickets were sold for films at Muvico Sundial theaters, while some 150 rooms were booked nightly at the Hilton St. Petersburg Bayfront.

Seminole County Public Schools is forging its own path. Or rather, ePathways. In the November issue of District Administration Magazine, SCPS was named a 2014 District of Distinction honoree and recognized for its ePathways initiative, which provides innovative and flexible education options. ePathways finds ways to accommodate student needs and interests year round and embraces learning as an ongoing process that schools can facilitate beyond a regular school day or year. SCPS was one of 49 school districts honored. 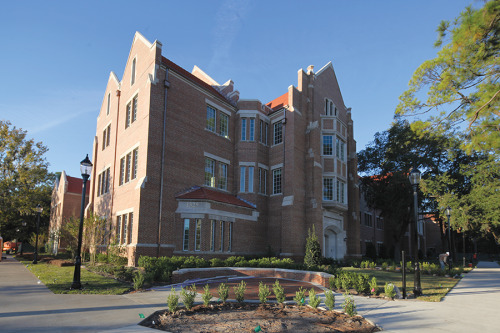 James W. “Bill” Heavener has put his stamp on the UF campus again. The 1970 UF alumnus and CEO of the Heavener Co. and Full Sail University, recently dedicated Heavener Hall, the new business undergraduate student building. Heavener made an undisclosed donation toward construction — the lead gift in a $35 million investment in undergraduate business education that also includes establishing an endowment for professional development, leadership and business ethics. The $23 million, 57,000-square-foot brick building will house the undergraduate program of the Warrington College of Business Administration under one roof for the first time. It is the first new classroom building since the 2010 construction of Hough Hall, home to the college’s graduate program.

Call it leaving one more legacy. University of Florida President Bernie Machen’s substantial impact has been felt on numerous fronts during a tenure that expires at year-end. And while this effort has largely gone unpublicized, the numbers are difficult to ignore. Since inception eight years ago, the Machen Florida Opportunity Scholars Program has enabled 1,596 Opportunity Scholars to graduate from UF. Their average family income: $18,292. The program supports low-income students who are first in their families to attend college. Now, UF has launched an initiative to raise $100 million for the program, which has given more than 3,200 Florida students from low-income families the chance to go to college. Kudos.

UF ranks among the nation’s leaders at transferring world-class research to partners who turn these discoveries into commercial products. Invitations have already gone out for UF’s 2015 startup showcase, A Celebration of Innovation, on March 10. The event offers a chance to see early-stage startup companies and myriad opportunities in cutting-edge technologies. More than $700 million in research is conducted annually at UF.

To bring the state’s health-care policies into the 21st century, Florida lawmakers must act quickly to utilize telehealth to connect patients with higher quality, more timely care. The most recent Florida TaxWatch report, Time for Telehealth, urges Florida legislators during their 2015 session to pursue incremental, rather than comprehensive, adoption of telehealth policies. While Florida made “great strides last year in pursuing telehealth expansion,” attempting to push through comprehensive reform in a 60-day session could delay desperately needed care, according to Tamara Y. Demko, director of the Florida TaxWatch Center for Health & Aging.

A $25 million project eight years in the making has come to fruition at the UF Health Cancer Center at Orlando Health. That’s impressive but not nearly as much as the sight of the 58-ton proton accelerator lifted by crane and placed into the building. The device delivers radiation to cancerous tumors using protons rather than the x-rays used in traditional radiation treatments. It’s widely considered a major advance for radiation therapy. Patients have traveled from overseas to Florida for this treatment, another boon for the state’s emerging medical tourism initiatives.

Florida Hospital announced the largest one-time private donation to aid chronic homelessness in Central Florida history — $6 million across three years — to complement a major commitment by the City of Orlando to house 300 of downtown’s chronically homeless individuals in three years. The city has earmarked $4 million over three years to support the “Housing First” model, a proven approach that provides housing with wrap-around supportive services to the chronic homeless. The financial commitments were the kick-off investments of the “Homeless Impact Fund,” a collaborative fund at the Central Florida Foundation — a new public and private investment-solutions vehicle to help those facing homelessness in Orange, Osceola and Seminole counties.

Hernon Manufacturing, a global manufacturer of adhesive sealants and dispensing equipment, is expanding its local operations in Sanford, adding 20 jobs over the next two years to its current total of 40 while also investing an estimated $2 million into the region. The City of Sanford, Seminole County, CareerSource Florida, Seminole State College and the Metro Orlando Economic Development Commission played roles in the expansion.

Coquí RadioPharmaceuticals Corp., a medical isotope company working to become the first U.S. commercial producer of Molybdenum-99 (Mo-99), has formally signed a contract with INVAP, an Argentine nuclear engineering firm, to design its Medical Isotope Production Facility in Alachua. Mo-99 is the parent isotope of Technetium-99, which is used in 80 percent of nuclear medicine procedures worldwide. In 2012, Congress passed legislation making it a national priority to produce Mo-99, an isotope necessary to detect a wide range of diseases, including cardiovascular disease and cancer.

In recent years, Sarasota has sought to promote itself as a hub of upscale cultural activity, led by marketing organization Visit Sarasota county. Two new additions certainly won’t hurt in those efforts. Ground has broken on a $300 million luxury hotel and condominium project, the Westin Sarasota and VUE Sarasota Bay. The Westin, to open in July 2016, will have 255 rooms in 18 stories plus 14,000 square feet of meeting space. The VUE, to open a few months later, will contain 141 units priced up to $2 million.

As testaments to the desirability of multifamily housing in Orlando, consider this tally: A 1,024-unit multifamily portfolio in Orlando was acquired by Atlas Residential for $150 million — representing the largest apartment complex sale in Metro Orlando this year. Also, an apartment complex in downtown Orlando, Crescent Central Station, was part of a nine-complex sale in multiple states valued at nearly $700 million. In Tampa, here’s another sign: Developers are turning an old warehouse into 46 apartments — the Warehouse Lofts — at a cost of roughly $6 million. Construction work begins January.

A 38-story office tower consisting of 749,035 square feet of Class A office space sold for $128.1 million — a price of $171 per square foot. Those are the numbers behind the sale of Tampa City Center, one of the largest commercial real estate transactions in Tampa Bay history. The building was erected in 1981 and became the city’s tallest building in 1986. The structure carries Leadership in Energy & Environmental Design Gold certification. And quite apparently, it contains a great deal of value.

The Four Corners area, located near U.S. Highway 192 and U.S. Highway 27 roughly on the Osceola/Polk county line and west of the Walt Disney World Resort, continues to build a name for itself. Early next year, Pulte Homes — one of the region’s top-selling production builders — will begin construction on a new 600-lot vacation home community, Windsor at Westside. Plans call for single-family homes up to nine bedrooms and townhomes of four and five bedrooms. The construction activity is cited as another benefit of Central Florida’s $50 billion tourism industry.

Legendary golfer Arnold Palmer has a prominent place in the Golf Channel’s new 13,295-square-foot expansion. The 2,520-square-foot, 170-seat cafeteria is called Arnie’s. Also, there’s a new 1,440-square-foot lobby that features tributes to Palmer, including murals and a timeline with memorabilia. In keeping with the theme, a state-of-the-art golf simulator and a putting green are part of the interior touches.

TransGenex Nanobiotech Inc., a research and development company, has announced that its cancer nanotechnology division has exclusively licensed the University of South Florida’s “3D tumor cell” technology for all cancer-related uses. This marks a first step for the company to evolve technology to product manufacturing. The licensing agreement will enable the company’s novel “tumor-on-a-dish” platform and provides TransGenex exclusive rights to commercialize 3D cancer cell culture reagents.