NASA, once again made history from Cape Canaveral, when it launched Orion on Dec. 5, going farther into deep space than any craft designed for human flight since 1972. The cone-shaped capsule perched aboard a United Launch Alliance Delta IV rocket successfully orbited the Earth twice during its 4.5-hour flight and splashed down in the Pacific some 600 miles south of San Diego.

Eight years in the making, Orion is designed to bring humans to deep space destinations, such as an asteroid — and eventually Mars.

Traveling to an altitude of 3,600 miles into space, the ETF-1 went 15 times farther than the International Space Station at an impressive 20,000 miles per hour.

The flight was intended to test many of the elements that pose the greatest risk to astronauts, as well as provide critical data needed to improve Orion’s design and reduce risks to future mission crews. Among the components tested were avionics, attitude control, parachutes and the heat shield (withstood 4,000 F˚).

Ultimately, Orion will fly atop the Space Launch System, a rocket with deep-space launch capabilities that will rival the legendary Saturn V rocket that powered the Apollo moon missions. NASA officials hope to have Orion manned around 2021 and eventually land on the Red Planet in the 2030s.

There was belief in some corners that development wouldn’t occur here until the cows came home. Well, the cows may be moving. Lake Pickett North LLC, with ties to a Dallas firm, purchased 700 acres of the century-old Rybolt Ranch in east Orlando for $15.5 million. Eventually all of the 1,435-acre ranch land will be sold. Plans have been submitted to Orange County for a mixed-use development with nearly 2,000 homes and about 100,000 square feet of commercial space. Yet, a battle over cattle could result. In 2010, there were plans to build Rybolt Park, another massive redevelopment, but the project didn’t make it out of the gate. 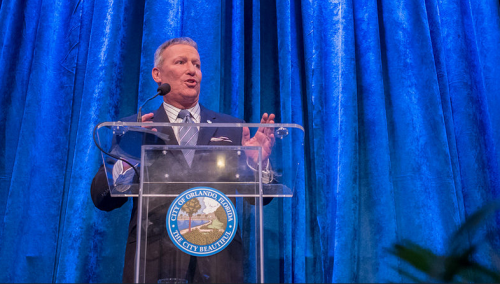 Orlando Mayor Buddy Dyer capped off a big year for the City Beautiful, declaring himself “The happiest mayor in all of America,” during his annual State of Downtown Orlando address on Dec. 3.

He highlighted the city’s accomplishments in the past year including SunRail, the renovated Orlando Citrus Bowl, the Orlando City Lions (Major League Soccer franchise), the University of Central Florida and Valencia College’s plans for a shared downtown campus and the opening of the Dr. Phillips Center for Performing Arts.

Dyer laid out the roadmap for the city’s future, including growing Orlando’s tech hub, supporting new business, enhancing transportation and furthering education through projects such as Creative Village. A video from Project DTO, a task force that has been working on a plan for downtown’s future, was part of the event.

Fourteen projects are underway currently, representing $372 million in investments. Four major projects are slated for 2015, including significant I-4 improvements.

Since the Skanska-led I-4 Mobility Partners team closed its financial and commercial deal in September with the Florida Department of Transportation, the clock has been ticking on the I-4 Ultimate project in Orlando. Now, with the details of financing, design, construction, operation and maintenance in place — with all due respect to those related efforts — the real work is set to begin.

Shortly after the new year, the $2.3-billion, 21-mile makeover of Interstate 4 from Kirkman Road to State Road 434 will bring lane closures and other inconveniences — along with the vision of transformation. Officials acknowledge the hardships to drivers but expect Central Florida’s major transportation artery will gain a new lease on life. They hope to ensure a sustainable economy for the region well into this century.

In brief recap, the public-private partnership project involves the reconstruction of 15 major interchanges; reconstruction of more than 140 bridges; four variable priced toll express lanes in the median; and the rebuilding of general-use lanes along the entire 21-mile corridor. The partners estimate construction will be completed by 2021.

Moreover, Florida’s largest transportation project will deliver the “efficient movement of goods, convenient mobility of the labor force, and access to the communities and businesses that make Central Florida a renowned place to live, work and play.”

Very promising — and sure to test patience. 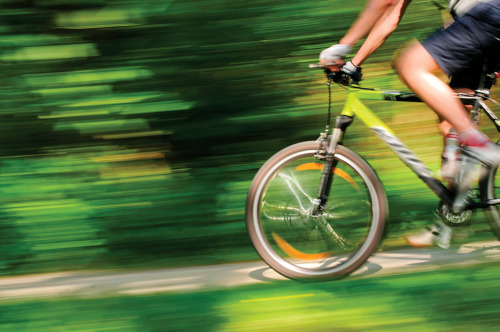 “Bike here.” That could well be the visitor slogan for southern Lake County, which has been designated a “bicycle friendly community” by the League of American Bicyclists. The South Lake Chamber’s Sports & Tourism Committee hitched its marketing wagon to bicycle riding, an initiative backed by five South Lake communities (Clermont, Groveland, Mascotte, Minneola and Montverde) along with South Lake Hospital and local business, The Cycling Hub. South Lake County is the only Florida community, among 55 entries, to be recognized. And it’s the second fitness-related designation for the region, previously being cited as “runner friendly.”

A new nature preserve that’s surrounded by development? Long Creek Nature Preserve in Flagler County has just that distinction, following its recent opening on one of Palm Coast’s busier streets (Palm Harbor Parkway). The plan is to build an environmental education center on site. At present, a fishing pier and a launch for canoes and kayaks serve as the classrooms. The environmentally sensitive land is rich in marine life and offers views of nesting water birds, alligators, and other Florida flora and fauna. With extra sensitivity to the land’s unique character, the City of Palm Coast enlisted a design team composed of architects, interior designers, environmentalists, engineers and archaeologists, including Bellomo-Herbert Landscape Architects (the prime consultant on the project), OCI MEP Engineers, Bishop Consulting Engineers, CPH Civil Engineers and VOA.

While Sarasota is getting upscale new shopping (The Mall at University Town Center) along with noteworthy projects like Westin Sarasota and VUE Sarasota Bay (Page 13), neighboring Manatee is making its own splash with Infinity Crossgate. A condominium building with units that start at almost $3 million is under construction on Longboat Key, on the Manatee County side of the barrier island. The five-acre site encompasses a main residence building, pool, clubhouse with fitness center and tennis court. Eleven units are planned by Georgia-based Crossgate Partners LLC, with “condo” sizes ranging up to 6,370 square feet. Covered balconies and floor-to-ceiling windows offer views of the Gulf of Mexico and Sarasota Bay.

The 32-year-old landmark, Flea World, is changing faces and increasing in value. A lively bazaar of makeshift shops and more than 1,000 booths, Flea World will turn into a mixed-use development called Reagan Center — if plans are approved. In addition to the Flea World site, assorted parcels totaling 118 acres along key stretches of roadway in Sanford will accommodate new single-family homes, apartments, offices and other stores. The property, currently valued at $15 million, would be worth an estimated $200 million-plus at buildout. Property owner Syd Levy has put together a development team consisting of RM Strategies Inc. in Winter Park and IBI Group of Maitland. NAI Realvest of Orlando will be the broker of record.