Browse: Home / Economic Development / In Case You Missed It

It’s a new season in Metro Orlando. Make that Four Seasons—along with the Cabana Bay Beach Resort and others. A recent spate of activity has brought the construction of an additional 2,400 hotel rooms to the area and the potential of roughly 1,700 new jobs.

The 444-room Four Seasons Orlando resort, located on Disney property, promises to help redefine the area’s luxury market through abundant amenities and personal service. The nostalgic Cabana Bay—themed for the 1950s and ‘60s and Universal Orlando’s fourth resort—already has more than 600 hotel rooms in place with another 1,200 more on the way.

Starwood Hotels & Resorts Worldwide Inc. announced plans to introduce its new Element brand in Central Florida, scheduled to open as part of the redevelopment of Orlando Fashion Square in July 2015. The 151-room hotel will help drive mall revenue by accommodating travelers who like to shop and is located across the street from Orlando Executive Airport and just three miles from the city’s downtown business district. And, among other hotel talk, there’s the possibility of another new hotel far away from primary tourist attractions, adjacent to the University of Central Florida.

The rationale behind the activity is that more choices for consumers creates more demand. Another impact: the encouragement of renovations. For example, with the announcement of the Four Seasons, upscale hotels like the Ritz-Carlton and JW Marriott at Grande Lakes Orlando are now in the midst of multiphase renovations.

And The Winner Is …

Then there was one. Among the four groups vying for the reported $2.1 billion I-4 Ultimate Project, I-4 Mobility Partners has emerged as the winner, with Skanska USA leading the way for a virtual who’s-who in such high-profile construction work. The Florida Department of Transportation selected the group as the Best Value Proposer for the public-private partnership project, which encompasses design, build, finance, operations and maintenance.

Skanska and John Laing will handle equity investment and financing, while Skanska, Granite Construction Inc. and Lane Construction Corp. head up construction; HDR Inc. and Jacobs Engineering Group are in charge of design; and Infrastructure Corp. of America is tasked with operations and maintenance.

Project specifics: reconstructing 15 major interchanges; constructing more than 145 bridges; adding four variable priced toll Express Lanes in the median; and completely rebuilding general use lanes along a 21-mile corridor. Work is expected to start in early 2015 with estimated completion in 2021.

Can you say big deal?

Says Karl Reichelt of Skanska: “In partnership with Florida DOT, our world-class team will deliver the best value solution to the Orlando region’s residents and businesses, and to the millions of international visitors to this globally popular destination.” 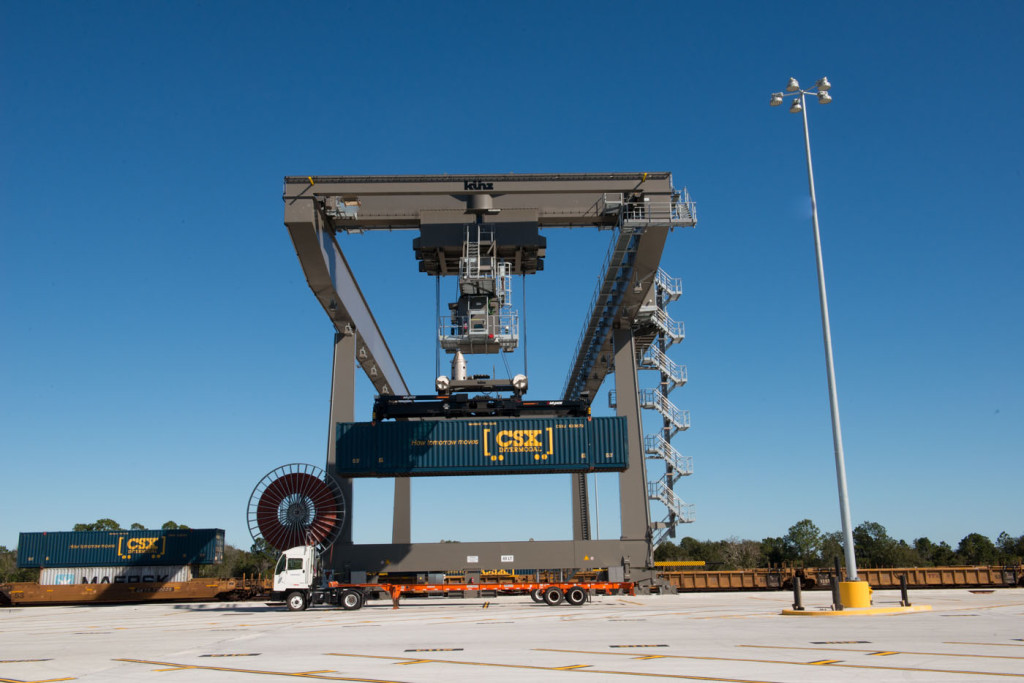 With apologies to UPS and its popular TV commercials, Evansville Western Railway and its new intermodal terminal are “all about logistics.” The affiliate of CSX began operations at the Central Florida Intermodal Logistics Center in Winter Haven, which is designed to serve as a transportation, logistics and distribution hub for Orlando, Tampa and South Florida.

The terminal contains five 3,000-foot loading tracks and two 10,000-foot arrival and departure tracks—enough to process an estimated 300,000 containers a year. In addition, the 318-acre facility is surrounded by 930 acres that are planned for development of up to 7.9 million square feet of warehouse distribution centers, light industrial and office facilities.

Tech innovation and environmental awareness also will be integral components, with Tony Reck, chairman and CEO of Evansville Western Railway, calling the facility “one of the most technologically advanced facilities of its kind in the country.” 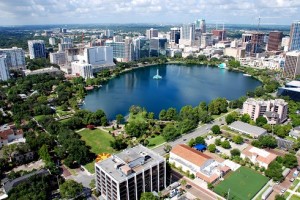 There’s a saying in sports that “records are made to be broken.” Add Florida tourism to the reference.

Both the state of Florida and Orlando are spinning the turnstiles and breaking records faster than Major League Baseball did during the Steroid Era. Earlier this year, Visit Florida—the state’s official tourism marketing corporation—announced that nearly 95 million visitors came to Florida in 2013, an increase of 3.5 percent from 2012’s previous record mark. In early April, Visit Orlando made a bigger splash at the IPW (Pow Wow) international travel conference in Chicago with its own tally: 59 million visitors last year, setting an all-time record for U.S. destinations. The new milestone represents a 3 percent increase over the previous standard set two years ago.

For Orlando, the tourism sector is in the midst of one its most significant expansion periods ever. Anchors Disney, Universal and SeaWorld each has signature upgrades underway. International Drive continues to reshape itself. And other attractions are stepping up in attempts to keep pace.

Of all the numbers, this is most telling: Every 85 visitors to Florida equals one job in the state. That’s roughly 11,765 jobs directly tied to visitors—according to FORWARD Florida math. 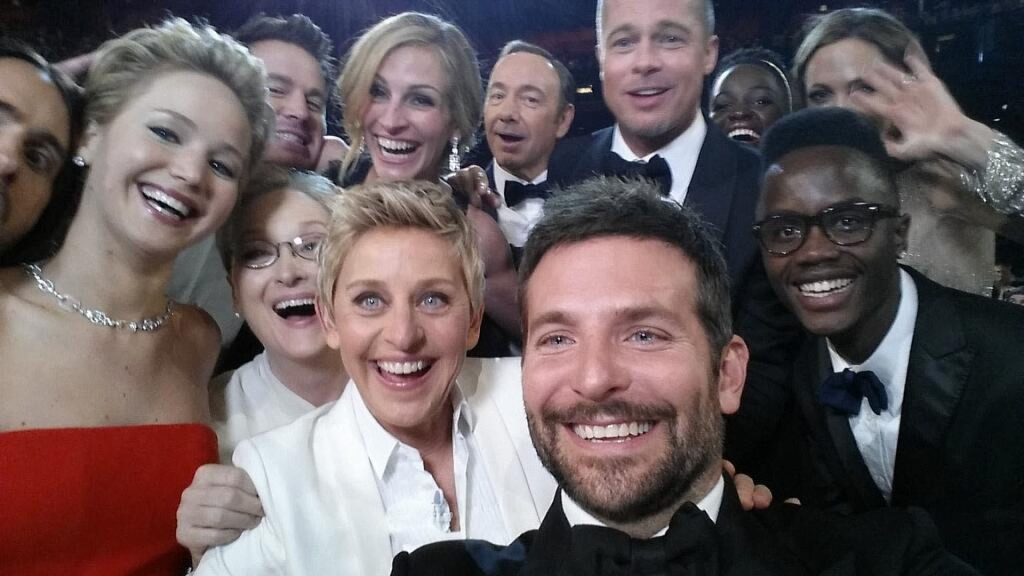 The phrase “Lights, Camera, Action” likely wasn’t heard before the famed selfie was snapped, but the timing sure was appropriate for Florida’s film industry.

Stetson University freshman Peter Nyong’o attended the 86th Academy Awards with Lupita Nyong’o, his sister who also happened to win Best Actress in a Supporting Role for her performance in “12 Years a Slave.” He then proceeded to join a star-studded cast for a random photo released by Ellen DeGeneres that drew global attention and crashed Twitter.

That same night, Full Sail University in Winter Park received its usual bevy of Oscars. A total of 129 Full Sail grads worked on Oscar-nominated projects, with 30 working on winning films. At about that same time, moves were being made behind the scenes to bolster film production throughout the state. As part of a proposed bill (HB 983), Enterprise Florida—the state’s public-private business recruitment organization—would gain the lead role. The bill, which ultimately failed, sought a $1.2 billion film incentive package. And, while those scripts still were being written, Tampa Bay was prepping for Bollywood—the International Indian Film Academy’s annual celebration of the Indian film industry. Held in late April, Bollywood reached an estimated audience of 800 million spectators in more than 100 countries.

Economic development on a global scale. 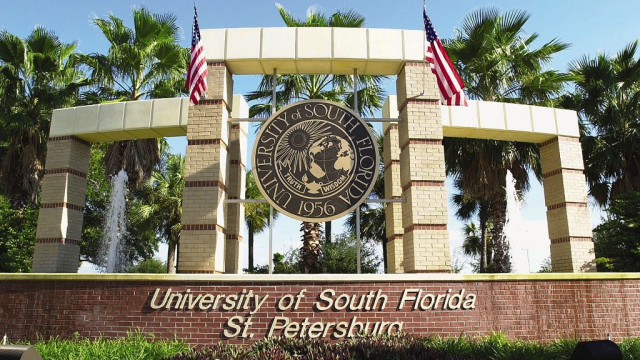 That sound you heard during the final days of April was the collective sighs of relief from state university officials. At press time, legislators were still hammering out details of a $75 billion budget, but Florida universities were in line (almost literally) to share more than $250 million in state funding for building projects.

Compared to the current year, universities can expect to gain an increase of nearly $83 million for construction projects next year, including $41 million from capital improvement fees that students pay. The funding includes $58 million for maintenance and renovation of existing buildings and $156 million to begin or complete construction of new buildings. Additionally, Florida’s 28 community colleges will have $108 million to slice, including $92 million for new construction.

Among the most relieved in the Super Region is University of South Florida St. Petersburg, which stands to receive $8 million for a business school. That new money, plus last year’s $5 million, puts USF St. Petersburg almost halfway toward the projected construction price tag of $27.3 million. Construction could start this fall.

Of course, the push for university funding around the state won’t stop. For example, while USF Health received $15 million for its Heart Health Institute, that represents only half the required funding—perhaps to come during the next legislative go-round.