The State is Red-Carpet Ready… Pending Legislation for Tax Credits

It’s not just a question from actors to directors. It’s also what filmmakers have asked lately about Florida when considering it for a major role in their productions.

Not so long ago, film, TV and video projects flocked to the state. Beginning in the early days of silent movies, Florida itself was as much a star as any film celebrity.

Before anyone had ever heard or thought of incentives, Florida’s natural attributes made the state a mecca for movie makers. It all started more than 100 years ago in Jacksonville, which soon became the “Winter Film Capital of the World.”

Back then, film companies were based in New York City, but needed a warm winter climate for location shooting. Jacksonville beckoned with exotic backdrops, a ready labor pool and easy rail access. Beginning in 1908, filmmakers began migrating South. Eventually, more than 30 satellite studios were established in Jacksonville.

For a while, the city and the film industry were a perfect match. But Jacksonville residents complained about some of the wilder public antics of silent movie making: car chases, fights, simulated robberies and fires. In 1917, a conservative city administration was elected to tame Jacksonville’s film industry. As California emerged as a movie production center and the major New York studios relocated there, the curtain quickly fell on Jacksonville’s role as a top film location.

As recently as nine years ago, the state was ranked the third most popular filming location in the United States. This lofty standing helped keep local production talent busy. But a January report from the Legislature’s nonpartisan policy analysis office noted that Florida had lost considerable ground to neighboring states. 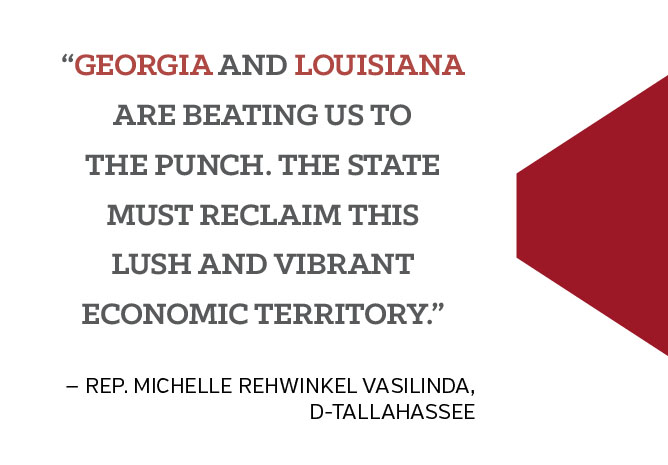 “Georgia and Louisiana are beating us to the punch,” said Rep. Michelle Rehwinkel Vasilinda, D-Tallahassee, in an article she wrote for Florida Restaurant and Lodging. “The state must reclaim this lush and vibrant economic territory.”

Ironically, some of the states now competing with Florida have actually copied much of their tax credit language from the Sunshine State’s previous incentive program. “It has performance-based qualification criteria that governments favor,” said Lux. “Productions must spend money here or with companies based here before any tax incentive can be awarded.”

In 2010, Florida earmarked nearly $300 million in tax credits for film production, hoping it would stretch over six years. But high demand caused it to disappear in only three.

“As recently as 2013, we worked on over 20 entertainment projects in a single year,” said Lux. “But in the last two years since no new tax credits were available, we’ve worked on just three.”

“Florida has done a lot in film in the last few years,” said Detert in an interview with the Miami Herald. “Then, we kind of lost our standing.”

Vasilinda says that any incentive program must be consistent. “I think we [should] just say this is a regular thing we fund,” she said. “They need to know year to year that they can rely on it.”

Other Florida legislators oppose tax credits on principle and argue it’s not government’s responsibility to offer incentives to any private enterprise. They believe as the water level rises, it should rise on its own.

“I’m not going to question that position on its merits, as I respect it,” said Lux. “But when you’re competing with close to 40 other states that already have incentive programs, you have no choice but to play the same game so this industry can grow in Florida.”

Some legislators believe tax credits for film production don’t provide enough return on investment. Lux and other supporters argue that it has created jobs, boosted tourism and helped small businesses in Florida grow.

“Beginning in 2010, the previous tax credit allocation of $296 million led to $1.5 billion in direct spending on Florida companies and Florida residents,” said Lux.

It also successfully attracted TV shows, commercials and films, such as Dolphin Tale. Both it and its sequel, Dolphin Tale 2, were shot in Clearwater. A study there by the University of South Florida found three of every four new visitors to the Clearwater Marine Aquarium credited the movie for their trips to the aquarium. City officials estimated the resulting economic boost in 2013 alone was $580 million.

No matter the location, money spent by movie, TV and video production often ends up in local pockets. According to the Office of Florida Film and Entertainment, production companies that came to the state during fiscal year 2012-13 spent an estimated $39.8 million on lodging and $20.4 million on food.

Lux says during the past three years, producers were constantly calling local Florida film offices to ask if any more credits had been found. “But without sufficient tax incentives, it just wasn’t fiscally responsible for them to come here.”

He continues to say tax incentive supporters are not greedy and are perfectly happy with an allocation that fairly reflects the economic impact and jobs generated by the film, TV and video industry. But no matter what dollar amount is placed into the tax credit program, he admits that it will never completely satisfy demand.

“The sheer volume of productions that want to come to Florida, hire in Florida and shoot in Florida is huge,” said Lux. “With a tax credit incentive program that’s adequately funded over a multiyear period, this state will once again win far more projects than it loses.”