(Editor’s Note: This is the final part of a series about the impact the lack of a state film rebate program is having on jobs for individual Floridians working in the film/TV/digital media industry.)

Robert Veliky moved with his family from upstate New York to Florida when he was eight. He was determined from a young age to be in the film industry. After high school, he enrolled at Florida State, hoping to be part of the university’s film program but instead was accepted into its School of Communication. Graduating in 1997, Veliky set his sights on Central Florida.

“I kept reading all these articles that Orlando was going to be Hollywood East,” he said. “I jumped on board. I lived in Miami, and went to school in Tallahassee. I like Florida, sign me up, Orlando is just down the road.”

After an internship at Universal Studios Orlando, Veliky was hired to be a part of the Universal Production Group in Florida, the department that coordinated all film and television production done throughout Universal’s properties and sound stages.

“I had a chance to meet a lot of different [production] coordinators, and see them repetitively which is the important part,” Veliky said. “They get to know your name and you move right along. Universal was busy, it seemed that every week something was going on.”

The doors of opportunity in Florida’s film community were opened. By meeting local film coordinators like Emilie Gibbs, Veliky’s focus on his profession got him noticed by the camera department.

In time, he began seeing that the work for camera assistants in film and episodic television was starting to go away. Veliky had bought a house, and his wife and two children were happy living in Florida, but he found he had to leave Orlando to find employment. First it was to Miami, and then jobs in California, Louisiana, and eventually, Georgia.

“I had to go out of town for work. My family loves Orlando, but after awhile my wife’s a single mom and all she knows me as is a paycheck,” he said.

At one point, Veliky considered finding other work. “What else could I do? What else would I be good at? At this point in the game, where else am I going to go? I can’t really get another job because if I get called to do production work I’m leaving.”

Part of the nature of film work is moving constantly from one production to the next, and having to travel out-of-state puts a strain on families.

“You get a couple of weeks on a job in this business and you are back on the horse again. I had to leave town so much I asked why don’t I ever see my family? I couldn’t do it anymore.”

In June 2013, Veliky moved to Georgia, and his family soon followed. He just finished seven months of work on The Walking Dead. Ever since, the work has been “nonstop.” His story is not unique.

“I work as much as I want to, but I can give you the names of 10 people I know right now who didn’t want to leave Florida, but had to.”

Like the vast majority of people interviewed for this story, he would move back to Florida, if it was viable.

“Moving from Florida was one of my family’s most difficult decisions, we are all Florida.”

Emilie Gibbs is a Florida native who produces commercials in Central Florida. Starting as a production assistant back in 1988, Gibbs has worked on feature films and episodic television, as well as movies.

These days, she works to put together productions in Florida by helping clients from around the country take advantage of the amenities Florida has to offer. From what hotels to stay in, or restaurants to frequent, Gibbs knows the answers and helps keep shoots within budget. She also is instrumental in hiring Floridians to work on these projects.

Throughout the years, Gibbs has seen the Florida film industry move in cycles; it has always been a part of the business. But something is different this time. Things have grown more difficult, and the downward turn in the cycle shows little signs of ending.

“Sadly,” Gibbs said, “a lot of (film crew) people who live in Florida are working outside of Florida. They’re going and renting apartments in different states and different cities.”

She remains adamant that film can be a viable business in Florida. She emphasizes how well the film industry works with local communities, and said the productions still occurring here are a great return on the investment.

Despite the equipment, people, and areas commandeered for a three-day commercial shoot, Gibbs says film is “the best clean-impact economy there is, very light on the state’s infrastructure, and yet brings in huge amounts of cash.”

To emphasize this point, she discusses the budget of such a commercial shoot. The total amount of money spent by the production towards local businesses and employment was roughly $311,609. If those productions move elsewhere, Gibbs warns: “You lose someone that has a strong economic tie to the community.”

Looking to the Future

If technicians like Nicole Zobrio were able to return from Georgia and start a family back in Florida, her spending in this state would double (or more) from the time she moved away. Veliky already has a family, one that is spending its money and paying taxes in Georgia instead of Florida.

But it is Gibbs, perhaps, who best sums up the reality of the lives behind the political debate.

“We are talking about people who can’t make their mortgages, who have health issues and are trying to stay afloat in a flooded market,” she said. “It’s a situation where you are battling many for jobs. It’s too many people looking for too few jobs. Our universities are putting out all these talented students, and they are leaving.”

Not exactly a happy ending.

Taylor is a communications technician at the Orange County Convention Center in Orlando. He has also been a freelance film/TV technician for 11 years. Recently, Taylor has started freelance writing for various publications in Florida and around the country.

Springtime in Tallahassee: A Cultural Affair→ 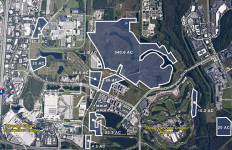